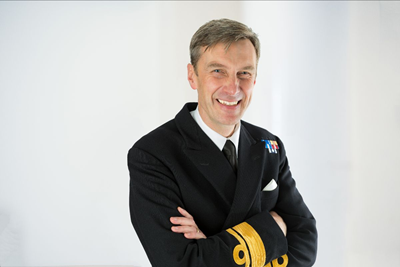 As National Hydrographer, Sparkes is the UK government’s representative at the International Hydrographic Organization (IHO), where he works with partners to set and maintain standards that protect the safety of mariners around the world. In addition to this, he oversees key international partnerships with foreign navies, hydrographic offices, governments and commercial organizations to support the sharing of global marine geospatial data. And on behalf of UK government, his teams continue to deliver numerous hydrographic and capacity building programs that help UK Overseas Territories to create safe and sustainable blue economies.

Sparkes joins the UKHO as a Rear Admiral in the Royal Navy. He has served previously in a wide variety of appointments, both at sea and ashore. Notably, he commanded the frigate HMS CUMBERLAND on counter-piracy patrol off Somalia and the UK’s Ice Patrol Ship, HMS PROTECTOR, in Antarctica. In addition to this, he commanded the 44 units (aircraft carriers, destroyers, frigates, mine-hunters, patrol vessels, and the maritime explosive ordnance disposal teams) of the Portsmouth Flotilla.

Ashore, Peter Sparkes has served in Ministry of Defense acquisition appointments and was responsible for the development and introduction into RN service of the Warship Electronic Charting Display Information System. Prior to joining UKHO he served as the Chief of Defense Staff’s liaison officer in the Pentagon, Washington DC.