OSM Officially On Board Statoil’s Peregrino 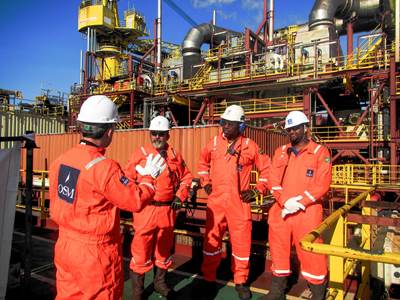 Efforts in Brazil are reinforced for OSM with more than 90 specialized offshore positions officially on board the Peregrino.
“OSM Brazil have successfully mobilized our crew on board the FPSO Peregrino,” says Tommy Olofsen, Managing Director of OSM Crew Management.
OSM Maritime Group (OSM) began its journey with Statoil’s Floating Production Storage Unit (FPSO) Peregrino back in early 2016.
However, increased efforts and investments in Brazil have been ongoing since 2013 – with multiple office locations, and an EBN Certification that marks the company as a registered Brazilian Shipping Company, OSM have positioned themselves strategically for growth and support within the area.
“Creating new opportunities for professionals in the area has been a natural result of this project – we have secured more than 90 specialized offshore positions on board the Peregrino” says Walker Lima, OSM Brazil General Manager.
With all hands on deck, Olofsen stresses the importance of communication between teams to ensure a favorable result: “Key to the success of this project is our commitment to continuous improvement.  We will maintain close communication between both our on- and offshore teams in the hopes of predicting change and creating solutions to challenges before they arise.”
Statoil • Brazil • OSM Maritime Group
Email

John Waterhouse is a ubiquitous character in the U.S. maritime industry, a deep-thinker, a signature bow tie and more than…