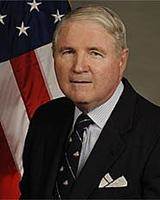 The so-called 2M alliance would see the two carriers pool 185 ships on European, transatlantic and transpacific services, which Maersk Line says would save it $350 million a year.

The proposal follows the rejection in June of a larger planned venture involving Maersk, MSC and France's CMA CGM by China's Ministry of Commerce on competition grounds.

The tie-up won U.S. approval on Wednesday after four out of five commissioners at the Federal Maritime Commission (FMC) voted not to seek further information from the two shippers about the impact of the alliance on exporters and ports.

Maersk said the company had not yet received formal notification of the FMC's decision.

The two shippers still need to win over regulators in Europe and China for the pact, the latest in a series of alliances between top container lines that are raising concerns among exporter groups about possible anti-competitive behaviour.

The FMC's Lidinsky, who voted against giving the alliance the green light, said in a statement there were many unanswered questions about the tie-up.

The commission should establish a vigorous monitoring system for the alliance, he said.

The Maersk-MSC pact would have the largest market share of all main shipping alliances on key trade routes, with 35 percent of the Asia-Europe route, 31 percent of transatlantic trade and 22 percent of transpacific, according to FMC figures.

Container shipping lines have been seeking to pool resources in response to overcapacity and low freight rates that have beset the shipping industry since the financial downtown in 2008.

Maersk chief executive Soren Skou met Chinese commerce and transport officials last month to discuss the 2M alliance, which it has said it hoped could start as early as January next year.

The China Shippers' Association, which represents exporters and cargo owners and lobbied against the earlier so-called P3 alliance, said it was also opposed to 2M because it could impact pricing.

"You cannot ignore that Maersk and MSC each already hold a large share of the market, so we think that for China it's not a suitable arrangement," an association spokeswoman told Reuters.

The Asian Shippers' Council, which represents 20 national and regional exporter groups, said maritime and competition watchdogs like the FMC and China's Ministry of Commerce should toughen regulations on shipping alliances.

Sixteen of the world's top container lines, who control more than 76 percent of shipping capacity, are in just four existing or planned alliances.

Lu questioned how regulators would monitor these groups to prevent anti-competitive and collusive behaviour including rate fixing.

Zhang Shouguo, vice-president of the China Shipowners' Association, said the association would monitor 2M closely if it won approval.

"The moment it shows signs it could damage consumers' interests or disrupt market competitiveness ... we will vigorously complain and ask the government to get involved," he said.

Maersk and MSC began talking about the smaller tie-up in July, soon after China's decision to block P3 which had previously been approved by the FMC and European Union.