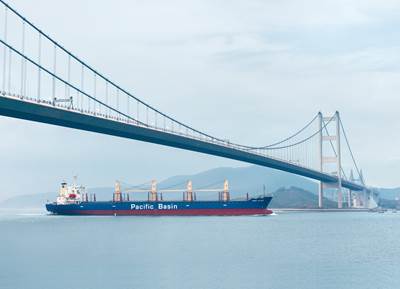 David Turnbull, Pacific Basin's board chairman, said, “Mats led the company’s exit from all non-core business segments and guided the growth of our core dry bulk handysize and supramax business from 34 owned ships in 2012 to a current fleet of 117 (after committed sales and acquisitions) owned ships and an overall fleet including chartered tonnage of over 250 ships. The company is today entirely focused on its core business with a strong team, efficient cost structure and a clear strategy. The board thanks Mats for all his contributions to the company and wishes him all the best going forward. He will be missed.”

Berglund said, “Pacific Basin is today one of the world’s largest listed dry bulk companies with a long track record of outperformance. Our liquidity position is strong and spot market rates have recovered to above prepandemic levels. We are well positioned for the future. It has been an honor serving with Pacific Basin for these past nine years, and it is time for me to step down. I am happy that the CEO position will go to Martin whose experience and energy will be good for the company.”

Flensburger Schiffbau-Gesellschaft (FSG) has a new Head of Engineering as of March 1, 2021, when Volker Hesse takes over the job.