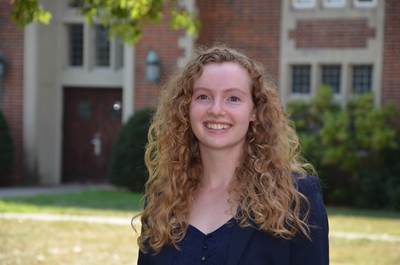 Webb’s scholarship selection committee chose Wistort for her academic excellence and leadership skills. Wistort, who is from Niskayuna, N.Y., has been involved with many student organizations and community projects. She is a member of the Webb Leadership Committee, which organizes community service and outreach projects for students. She has also been the student representative to Webb’s Board of Trustees and is the co-chair of the Women of Webb. Her interests include workboat design, liquefied natural gas (LNG) fueling and the energy sector. Upon graduation, Wistort is interested in joining the maritime industry and earning a professional engineer’s license.
“Hannah is hardworking and dedicated student who has been an important member of the Webb community for the past three and a half years,” said Webb Institute Dean Matthew Werner. “Her focus on excellence, professionalism, community service and leadership illustrate that her guiding principles are in alignment with the Crowley Maritime Corporation and this award.”
To support this specialized, top-ranked institution – a four-year college specializing in naval architecture and marine engineering – Crowley initiated the Thomas B. Crowley, Sr. Memorial Scholarship at Webb in 2007 and has since given tens of thousands of dollars in support of the school’s students.
“The Thomas B. Crowley Sr. Memorial Scholarship Program is a true testament to Crowley’s commitment to higher education and the future of the maritime industry,” said R. Keith Michel, president of Webb Institute. “Webb Institute is honored to continue its partnership with Crowley Maritime Corporation and this prestigious program that has generously chosen to highlight and support our students.”
Crowley’s involvement with Webb took on added significance in 2008 when the company acquired Seattle based naval architecture and marine engineering firm Jensen Maritime Consultants.
Many Webb graduates are currently employed by Crowley and Jensen in a number of disciplines from naval architecture and marine engineering, to vessel construction management and vessel operations.
Crowley and Jensen also offer student internships and oftentimes employment opportunities after graduation, and provides resources in support of student leadership development. In 2007, Crowley donated $250,000 to establish the Marty Johnson ’88 Leadership Fund, in honor of the late senior naval architect and 1988 Webb alumnus who tragically passed away while on salvage assignment for the company.
Webb has publicly shown its appreciation to Tom Crowley, company chairman and CEO, for the support he has provided to both Webb and the maritime industry, bestowing upon him an honorary doctorate degree during its 119th commencement ceremony in 2015.
Since 1984, Jacksonville-based Crowley has provided more than $3 million dollars in scholarship funding for more than 1,000 students. The company has also donated more than $2 million over the years to support other educational programs. In 1994, Chairman and CEO Tom Crowley Jr. established the Thomas B. Crowley Sr. Memorial Scholarship Program in honor of his father who led the company to extraordinary heights before passing away in 1994. The company continues to give scholarship dollars to deserving students in the U.S., Alaska and Puerto Rico. In 2006, the program was expanded to Central America, and to date has provided financial assistance to more than 20 students in that region.
Alaska • Central America • construction management
Email