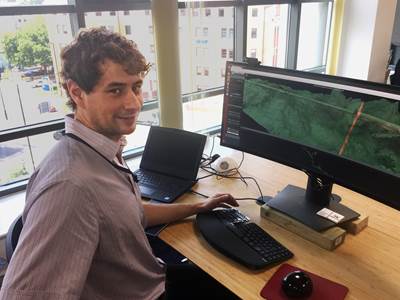 A former technical lead for the European Space Agency, Wallace will drive the development of a real-time 3D vision system for ROVs and AUVs. He will also explore how artificial intelligence can be used to solve asset integrity issues by extracting actionable information from traditional video survey data.
As CTO, he will enhance Rovco’s underwater photogrammetric 3D modeling capabilities utilizing the latest simultaneous location and mapping (SLAM) techniques for complex underwater inspections.
Wallace joins Rovco from SCISYS, a computer software and services company, where he was an autonomy and robotics analyst, focused on developing innovative robotic navigation and scene understanding technology for the U.K. and European Space Agencies. Prior to this he was a research associate at Heriot Watt University in Edinburgh, where his work included the implementation of an indoor localization system.
With more than 15 years’ experience in the robotics, computer science and software engineering space, Wallace also worked on the European Space Agency’s Master project and the U.K. Space Agency’s Chameleon field trial. During this time, he developed an autonomous exploration rover to detect targets of interest and survey the geological characteristics of an area while in transit.
Wallace will also assist the Bristol-based firm in attracting and securing future equity as the company looks to grow its UKCS position and gears up for further overseas expansion.
Brian Allen, CEO of Rovco, said, “We are investing in the development and deployment of systems and services that deliver real value to our customers. Iain will be instrumental in driving this strategy forward while also developing our ROV 3D visualization offerings and AUV capability.”
artificial intelligence • Brian Allen • computer software
Email