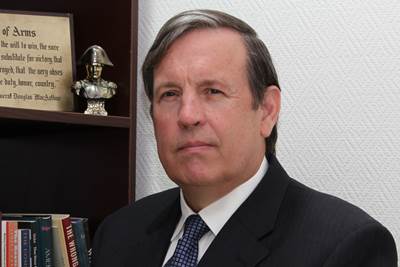 The U.S. Merchant Marine Academy at Kings Point (USMMA) announced today that John R. Ballard, Ph.D., has been named the new Academic Dean and Provost at the federal service academy. In this position, Dr. Ballard will serve as the chief academic officer and principal advisor to the Superintendent in all matters relating to the academic program and faculty. He will also co-chair the educational priority working group for the recently released USMMA strategic plan.

Dr. Ballard served as a Marine Infantry officer immediately following graduation from the U.S. Naval Academy. He commanded Marines at the platoon, company, battalion and group levels, in both the active and reserve components, served in peace operations in Haiti, and commanded Marines, Soldiers and Sailors in combat during the Iraq War.

His academic experience includes service at the Joint Forces Staff College, New Zealand’s Massey University, the Naval War College, and as the Dean of Faculty and Academic Programs at the National War College. He was also the founding Dean of the National Defense College in the United Arab Emirates. Most recently, he served as the Vice President for Veteran’s and Military Partnerships and Director of the Service members Opportunity Colleges at the American Association of State Colleges and Universities.

He is a published author and has lectured and presented seminars around the world on matters of national security, leadership and military history. He has published six books and is awaiting publication of his latest work, the co-authored book, National Security Education: Developing Strategic Leaders for 21st Century Security Challenges.

He is a graduate of the U.S. Naval Academy (B.S.), California State University, Dominquez Hills (M.A.), and The Catholic University of America (Ph.D.). Dr. Ballard has been recognized with a Distinguished Writing Award from the Army Historical Foundation and a Department of the Navy Meritorious Civilian Service Medal. His military decorations include the Defense Superior Service Medal, and the Legion of Merit and Bronze Star medals for service in combat during the Iraq War.

ONE SEA has appointed Capt Eero Lehtovaara as its new Chairman. Lehtovaara, a Master Mariner and Associate Fellow of the Nautical Institute…