Jenny Long was an Aggie with a challenge. She had an important job opening to fill with her company, BP Shipping Americas, located in Chicago. As the regional voyage operations superintendent for BP Shipping, it is her job to fill it with the best and most qualified candidates. Long graduated from Texas A&M University at Galveston with a Marine Transportation degree and a minor in Maritime Administration.

With a staff of 390 and 1,270 BP Maritime Services Officers, BP Shipping has main offices in Sunbury and Canary Wharf in the United Kingdom, Singapore, Houston and Chicago serving Europe, North America and the Asia/Pacific. The company brings more than 100 years of expertise in providing a variety of skills such as seafaring, engineering, chartering and legal services to manage shipping risks and deliver innovative and agile marine solutions.

Long says that summer training cruises with the Texas A&M Maritime Academy were always very memorable. “One of the best memories is when we were on the Texas Clipper II off of Maine,” said Long. “President George H. W. Bush boarded our training ship and met all of the cadets. He took pictures with everyone.” She was also able to cadet sail on a tanker during her junior training cruise and that got her the certification that led her to jobs on tankers after graduation. “After sailing for five years on tankers, I transitioned to a ship operator role at BP Shipping allowing me to combine my technical knowledge with the commercial skills I obtained with my Maritime Administration minor.” 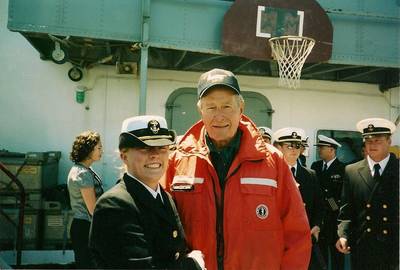 Jenny Long meeting President George H. W. Bush while on a training cruise in Maine aboard the Texas Clipper II.Michael Flannery was a Maritime Administration major at Texas A&M Galveston. He is now a ship operator for BP Shipping using his commercial experience and marine awareness to manage risks associated with the transportation of hydrocarbons, chemicals and dry bulk. Applying as an out-of-state student, Flannery admits his main goal at Texas A&M Galveston was to move to the main campus in College Station. “Texas A&M Galveston opened my eyes to the world of shipping and the maritime industry,” said Flannery. “Instead of moving to College Station, I spent all four years in Galveston learning the ins and outs of the maritime industry and spent 11 years in the maritime industry because of that foundation.”

Garrett Jones, also a ship operator, majored in Maritime Administration with a minor in Economics. He coordinates commercial voyage operations for their ships operating in North and South America. “Attending college at Texas A&M Galveston was really interesting because we were submerged in a sector of the maritime industry,” said Jones. “In my work I use skills acquired from Texas A&M Galveston. The education I received really gave me a strong foundation to build on when I first entered the industry.”

Sara Broadrick went a different route to get from Texas A&M Galveston to BP Shipping. She was a Marine Biology major, but also got her third mate’s license while at the university. Today, she is a vessel operator using her maritime knowledge to provide safe transportation of hydrocarbons. “Moving oil safely is essential to the overall world’s economy, as well as BP’s bottom line, and shipping supports both,” said Broadrick.

In 2008, Broadrick was a student at Texas A&M Galveston during Hurricane Ike. She had to relocate for a semester when damage from the storm forced Texas A&M Galveston to move temporarily to the main campus in College Station. “That semester in College Station was unique because we were definitely out of our element being far from the sea and at a much larger campus,” said Broadrick. “Carpooling back and forth for simulator training on the weekends was an adventure in itself.”

Broadrick, with a third mate’s license and skills in marine transportation, plus a degree in Marine Biology, combined what she learned at Texas A&M Galveston. She worked on deep sea vessels and when she was home between voyages, she volunteered at aquariums. “I clearly pursued the marine transportation portion more aggressively than the marine biology part of my degree, but I have enjoyed both very much.”

Justus graduated from Texas A&M Galveston with a Marine Transportation degree and also received his third mate’s license. “I find it funny that originally my goal was to have a career at sea,” said Justus. “Of course the classes in my major helped but I find that some of the electives I took at Texas A&M Galveston were almost equally important. For instance, I took technical writing and it is amazing how much I draw from that experience. I have to communicate daily with ship captains, brokers and agents all over the world whose first language may or may not be English. Being able to effectively communicate is a huge part of this job.”

Stewart Andrews, a Marine Transportation major at Texas A&M Galveston, says his responsibility in ship operations is to “help fuel the world’s economy and impact BP’s bottom line by ensuring safe and efficient movements of clean petroleum products.” It was his education at Texas A&M Galveston in Marine Transportation that helped him get his job at BP Shipping. “The university took my love for ships and gave me the knowledge and skillset in the industry and turn it into a career both offshore and now onshore.” 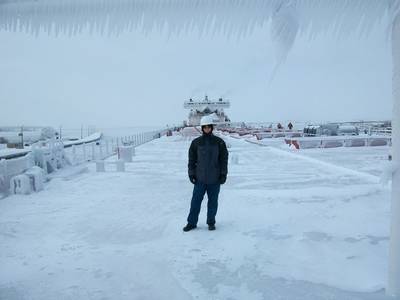 Stewart Andrews aboard the bulk ship Edwin H. Gott sailing the St. Mary’s River on the border of Michigan and Ontario, Canada.

It’s been an exciting career for Andrews. “One of the ships that I helped operate during my training here happened to be our first delivery to Porto do Açu, Brazil, a brand new port that supplies fuel for deep water oil and gas exploration off the east coast of Brazil.”

Mark Lee, the Voyage Operations Manager - Americas at BP Shipping and manager of these graduates likes what he see in his Aggie employees. “Whilst we advertise our vacancies to ensure we attract diverse talent, we have over the last 11 years enjoyed great success with former Texas A&M University at Galveston students,” said Lee. “I attribute this to not only their excellent work ethic, but equally as important, the diverse demographics of the university.”

BP Shipping has hired graduates from several different degree programs at Texas A&M Galveston including, Marine Transportation, Maritime Administration and Marine Biology with many of their Aggie employees holding their third mate’s license. Lee says Texas A&M Galveston’s graduates come to BP with numerous work skills. “Their work experiences prior to coming to work for BP have been equally as varied from deck officers of tankers, containers and dynamic positioning vessels, as well as prior experience in shipping and agency operations.”