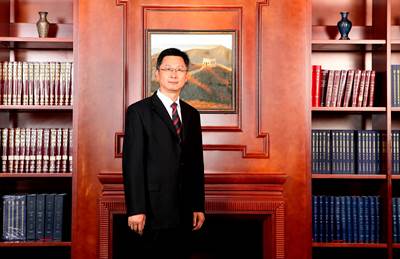 Sun Feng formerly a CCS vice president, was named Chairman and President, taking over from Mo Jianhui, who retired.

In a handover ceremony at CCS headquarters in Beijing, Sun paid tribute to Mo, praising his contribution to CCS.

“Mr. Mo oversaw the rapid growth of our classed fleet, an expanded global network and he helped increase our international presence and influence, we thank him for all the success he helped deliver,” he said. “We have also seen our offshore business increase despite the downward trend. Meanwhile, our industrial business has also grown and our non-marine business is now close to 50 percent of the total business volume.”

Sun, aged 56, worked in the Dalian Branch of CCS from 1987 to December 2005. He served as general manager of the Classed Ship in Service Department since December 2005 based at CCS headquarters and worked as vice president of CCS from December 2008 till December 2021. He has been in charge of almost all business areas of CCS including classification survey services for ships, offshore installations and related industrial products, science and technology, R&D, IT and international affairs.