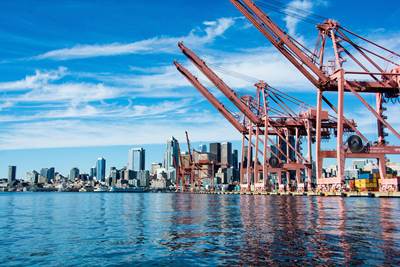 International Longshore and Warehouse Union (ILWU) and the Pacific Maritime Association (PMA) employer group have been negotiating a new contract since July 1. The ILWU's announcement on Tuesday comes after the two sides have traded jabs in the media about automation, another contentious issue at the negotiating table.

The ILWU alleged that PMA member SSA Marine - operator of the largest container facility in the Pacific Northwest - colluded with an unnamed union in Seattle to trigger a National Labor Relations Board (NLRB) hearing that could clear the way for SSA to use another workforce to do "cold ironing" work that allows docked ships to use electricity from shore.

SSA and the PMA did not immediately respond to requests for comment.

The ILWU said its members exclusively perform cold ironing work in the Pacific Northwest. The union alleged that employers are using the NLRB to avoid assigning work to ILWU members - an issue it said was addressed in 2008 bargaining.

"Our employers have been using the NLRB as an escape hatch to avoid their obligations under out collective bargaining agreement," Willie Adams, ILWU International president, said.

"We are currently regrouping to determine how to proceed in negotiations," ILWU Coast Committeeman Cameron Williams said in the statement.

President Joe Biden's administration has vowed to tackle inflation-stoking supply chain disruptions. Biden administration officials began working with both sides before the contract expired in a bid to avoid a repeat of 2015's negotiating breakdown that resulted in an eight-day work stoppage.

The ILWU and PMA in late July announced that they had reached a tentative agreement on health benefits.