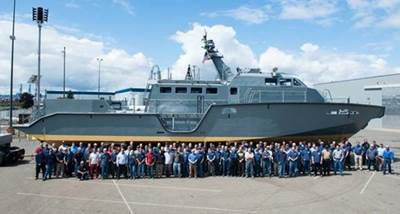 U.S. shipbuilder SAFE Boats International will reopen its Tacoma, Wash. facility following the award of a $20 million lead contract for the U.S. Navy to start construction of the Mark VI patrol boats headed for the government of Ukraine.

The U.S. Navy announced in January it had awarded SAFE Boats a portion of the contract to purchase long-lead material and associated pre-production and planning support with the remaining $80 million award anticipated in June.

SAFE Boats’ Tacoma facility situated alongside the deep-water banks of Commencement Bay is an idea site to manufacture and launch the 85-foot Mark VI. The contract will add 75 new maritime workers to the shipbuilder’s Tacoma workforce.

Leadership from local elected officials and economic development partners paved the way for the expansion enabling SAFE Boats early access to information and support during its due diligence phase. A project team from the Economic Development Board for Tacoma-Pierce County (EDB), City of Tacoma, Port of Tacoma, Pierce County, and Impact Washington, the Washington state affiliate of the National Institute of Standards and Technology – Manufacturing Extension Partnership network, worked with the company to identify new and existing opportunities for assistance with grants, permitting, and workforce development.

“SAFE Boats is incredibly fortunate to have such a strong and engaged team supporting our efforts to bring production back to our Tacoma facility. We have been working toward this goal for more than 3 years and this project team has supported us every step of the way. This is an incredible example of a true partnership which will create jobs and generate economic growth for the region while supporting national security and foreign policy objectives,” said Richard Schwarz, CEO of SAFE Boats.

“The Tacoma Tideflats is a working waterfront that supports thousands of manufacturing and industrial jobs, and we are thrilled for SAFE Boats to reopen operations at the Port,” said Dick Marzano, Port of Tacoma commission president. “The addition of these high-skilled jobs is important to the maritime industry and an integral part of Pierce County’s economic recovery and growth.”

“We are delighted that SAFE Boats is adding many new family-wage jobs to our region,” said Bruce Dammeier, Pierce County Executive. “We have a talented workforce ready to excel in our manufacturing and technology industries, so I know the U.S. Navy made a smart choice in choosing a Pierce County business.”

The company is still working through site preparation and will soon begin outreach to recruit its workforce. “SAFE Boats International's commitment to returning high-paying jobs to Tacoma is a tribute to the company's tenacity, Tacoma's workforce and the economic engine that is the Port of Tacoma," said Mayor Victoria Woodards. "We congratulate SAFE Boats on this contract announcement and look forward to the safe reopening of the Tacoma large craft shipyard."

“It’s a tremendous win. The shipyard will be hiring skilled welders and installers and the trickledown effect will create additional maritime related jobs,” said Bruce Kendall, President and CEO, of the Economic Development Board for Tacoma-Pierce County. “And, these family-wage jobs will mean more business for local restaurants, salons and other service businesses.”

According to the contract, the first two boats are to be delivered in December of 2022. Ultimately, the Navy may need a total of 16 vessels.