Port of Vancouver USA by the Numbers 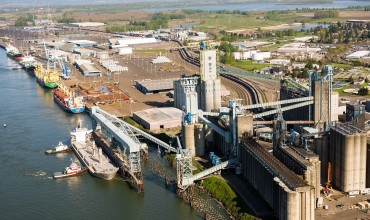 The Port of Vancouver USA supported more than 24,000 jobs in the region in 2018, an increase of nearly 4,000 jobs since 2014, according to an independent analysis by Martin Associates.

The study calculated the economic benefits tied to the port’s marine and industrial activities and was an update to the analysis conducted by the firm in 2014.

The study found that 24,068 total jobs were supported by the port in 2018, including 3,910 direct jobs at port facilities, making the port, along with its tenants, the second largest employer in Clark County.

Positive impacts of increased jobs ripple throughout Southwest Washington and the region, with the following economic benefits:

•$753.3 million in wages, salaries and local consumption generated by the port
•Average annual salary of $56,415 for each port-generated direct job
•$132.4 million in state and local taxes, which support public services such as schools, police and fire protection
•$386.2 million in local purchases

In addition, 2018 was the port’s fifth consecutive year of record cargo volumes, with 8.1 million metric tons of product crossing the docks. Combined with revenue generated from the port’s industrial tenants, that adds up to a total regional economic value of $3.76 billion. The $860 million increase since 2014 was driven primarily by additional handling of steel and agricultural products.

Investments in landside and marine infrastructure have also set the port up for success.

“Over the past decade, we have made a commitment to investing in the infrastructure that our tenants depend on,” said Port of Vancouver USA CEO Julianna Marler.  “The West Vancouver Freight Access Project and Centennial Industrial Park are just two examples of our work to lay a foundation for growth at the Port of Vancouver. We continue to think strategically about making targeted investments today, so we can create jobs and build the economy for Vancouver and for the region well into the future.”

The port commissions the Martin Associates study to measure its economic influence in Clark County and the Pacific Northwest, and to assist in planning the port’s future. The economic analysis is also a key component in the port’s integrated decision-making process when evaluating cargo mix and prospective tenants.