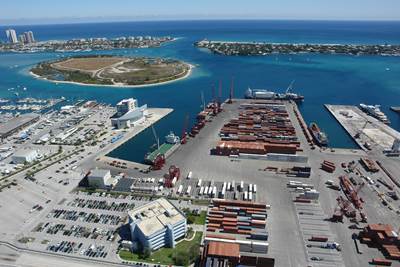 (Photo: The Port of Palm Beach)

The Port of Palm Beach is training employees on how to recognize the behaviors that can indicate human trafficking and how to safely report it.

Seaports can be a key location for identifying people who are victims of human trafficking, including women, men and children who are subjected to sexual exploitation or forced labor through the use of force, fraud or coercion.

When labor trafficking victims are stuck on maritime vessels, they can be forced to work long hours, compelled to extend their contracts, be paid less than they agreed to work for, or their wages can be withheld entirely. Often, the only opportunity these victims have to seek help is when a ship is docked at port. Sex trafficking can also take place at port facilities or onboard ships when seafarers participate in commercial sexual exploitation, either while ships are at dock, or at sea.

The training is called Ports to Freedom, and it was unanimously approved by the port's board of commissioners during a regular board meeting on January 21. It is said to be the first online, video-based training program specifically designed for the maritime industry. The Port of Palm Beach is the third seaport in the United States to begin using this new human trafficking prevention training.

“We are proud to be the first seaport in Florida to adopt the Ports to Freedom training. I believe it shows our commitment to safety and security. The more our employees learn how to identify and report a potential human trafficking situation, the better chance there is of saving a life,” said port executive director Manuel Almira.

Florida currently has the third largest number of human trafficking cases reported in the nation, and in 2019 there were 896 cases from Florida reported to the National Human Trafficking Hotline.

"The Department of Transportation’s pledge program is shining a light on a problem that is the human rights issue of our modern times,” said Mar Brettmann, CEO of BEST. “By signing the pledge, the Port of Palm Beach is committing to train their employees so they can learn how to be an advocate for victims if they see something that may be a trafficking situation. This can help more vulnerable people have a chance to escape their traffickers and rebuild their lives.”