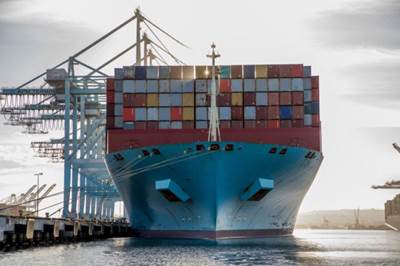 APM Terminals Pier 400 Los Angeles has established a new single vessel cargo operations record during the call of the 13,600 TEU capacity Maersk Evora, with a combined total of 24,846 TEUs loaded and discharged over a 128-hour period. (Photo: APM Terminals)

The Port of Los Angeles said it is on pace to become the Western Hemisphere’s first-ever port to move 9 million 20-foot equivalent units (TEU) in a single year, following strong box volumes in the month of October.

Although October 2017 container volumes were down 8.1 percent from 2016’s record-setting figure, the 748,762 TEU moved last month propelled the port to its third busiest October ever and kept it on track to surpass last year’s annual total.
L.A. moved 7,639,756 TEU in the first 10 months of 2017, up 6.4 percent compared to the same period in 2016, which closed with a record total of 8.8 million TEU for the year.
A recent call from a Maersk ship at APM Terminals Pier 400 Los Angeles went a long way to help the port maintain its record pace.
“In October, the good men and women of the ILWU moved 24,308 TEUs off and back on the Maersk Evora at APM Terminals in Los Angeles, which is believed to be a world record for a single vessel port call,” said Port of Los Angeles Executive Director, Gene Seroka. “It’s that kind of efficiency and productivity that our supply chain partners have come to expect and deserve.”
APM Terminals Pier • Gene Seroka • Louisiana
Email

The U.S. Department of Transportation’s Maritime Administration (MARAD) said Tuesday it is accepting applications from eligible…