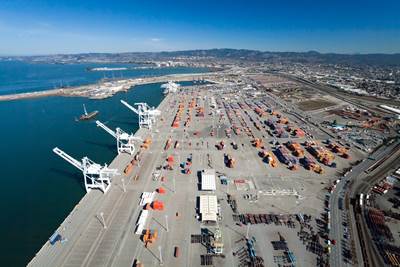 The Oakland Board of Port Commissioners have extended the Port's landmark project labor agreement (PLA) that increases East Bay hiring on Port-related capital projects. Negotiated in 2016, the PLA serves as a model for increasing the number of disadvantaged workers in the construction trades especially the highly competitive list trades. The five-year contract will continue to increase local hiring on Port construction projects, increase the number of disadvantaged workers entering the trades and boost earnings for local workers. The Port’s PLA contributes greatly to the East Bay economy. Since 2016, local workers earned over $19 million.

"Our agreement specifically addresses the need to increase participation of local, minority and disadvantaged workers," said Port of Oakland Director of Social Responsibility Amy Tharpe. "It also strengthens key partnerships within industry and labor so that we can prepare our workforce for a post-pandemic construction environment.”

The Port of Oakland created a Maritime Aviation Project Labor Agreement (MAPLA) in 1999. The agreement covers maritime and aviation-related construction projects funded through the Port's Capital Improvement Program. It supports smaller companies that do business with the Port.