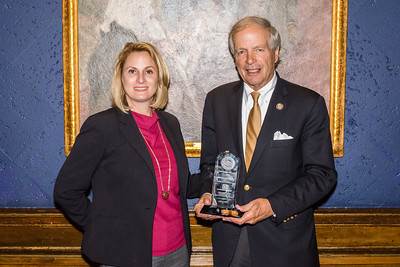 Michael W. Kearney, Chairman of the Board of Commissioners of the Port of New Orleans, was named recipient of the 2017 Diolkos Award at the 7th Annual Rail Supply Chain Summit in Chicago on June 14, 2017.
The Diolkos Award recognizes an individual with outstanding vision and leadership within the supply chain who equally has contributed to his community.  The award is named after Ancient Greece’s Diolkos Wagonway, the world’s first supply chain and earliest known form of rail transport, which facilitated the transfer of heavy cargo from sea, over land, to the sea.
“Chairman Kearney understands the strategic value of a strong intermodal system and its importance to our competitive advantage globally,” said Brandy D. Christian, President and CEO of the Port of New Orleans. “I congratulate him on this well-deserved honor. It has been a privilege to work with him to further the Port’s economic impact in the region.”
A prominent local businessman and Chairman of The Kearney Companies (KCO), a logistics firm that began servicing Port NOLA in 1996, Kearney has spent more than 40 years working in transportation. Appointed to the Board of Commissioners for Port NOLA in 2012, the New Orleans native has worked tirelessly to forward the Port’s mission to maximize maritime commerce, help gain and retain new business, and improve efficiency.
In 2016, Kearney was recognized for his outstanding commitments to New Orleans by the Rex Organization by being named “Rex,” King of Carnival.  With a deep commitment to the well-being of the New Orleans community, Kearney has served on numerous boards and commissions.
Carnival • Greece • Port NOLA
Email