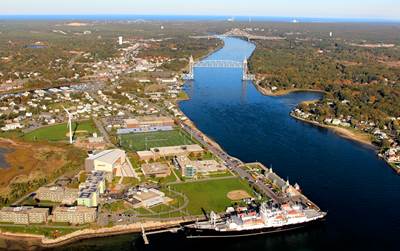 One of seven U.S. maritime academies, the Massachusetts Maritime Academy’s picturesque campus in Buzzards Bay has sent thousands of mariners into the global maritime workplace since its inception in 1891. CREDIT: MMA

The American Maritime Partnership (AMP) — the voice of the domestic maritime industry — congratulates the more than 1,650 young men and women who have graduated from the seven U.S. maritime academies this Spring.

Applauding them for their dedication and commitment to pursuing a career that supports our nation  in times of both peace and war, AMP is proud to welcome a new generation to the workforce. Generations of retirement have created a shortage of mariners, making this and future classes of cadets all the more important.

“A strong U. S. Merchant Marine helps to grow our economy and protect our nation in turbulent times,” said Rear Admiral Mark Buzby, Maritime Administrator.  “The graduates of the US Merchant Marine Academy and our six state maritime academies, whether they choose to enter our armed forces, to sail commercially in the Jones Act domestic trade, or to sail internationally, are helping strengthen America because — as our Founders knew — a vibrant and growing maritime industry is essential for both our economic and national security. I congratulate all of our new Deck officers and Engineer officers and wish them fair winds and following seas. Welcome aboard.”

While speaking to the U.S. Merchant Marine Academy at King’s Point commencement ceremony on June 15, 2019, Assistant to the President for Trade and Manufacturing Policy Peter Navarro addressed the importance of their studies in supporting the nation’s economy and national security. Dr. Navarro stated: “We are especially proud you have chosen a career in service to this great nation. Whether you find yourself in military uniform upon graduation or as a commercial merchant  mariner helping to support the American military's supply chain and the U.S. economy, maritime is our national heritage.”

“American mariners deliver an invaluable service to our nation’s economic and defense needs, enabling not only our commercial marine transportation needs but providing the infrastructure and manpower for national defense and humanitarian missions,” said Matt Woodruff, Chairman of the American Maritime Partnership. “As Chairman of AMP, I am extremely proud to honor the graduates of the American maritime academies and welcome our shipmates into this critical and gratifying career path.”

Post-graduation, many will sail on vessels in the domestic fleet, which includes over 40,000 self-propelled vessels, tugs, and barges. These graduates will be joining nearly 650,000 private U.S. citizens who are employed through the domestic maritime industry stemming from a variety of career paths, including military veterans and those who have “climbed the hawespipe” and advanced through the ranks.

The U.S. domestic fleet moves nearly one billion tons of cargo each year between U.S. ports, or roughly a quarter of the nation’s freight. These skilled U.S. citizen merchant mariners ensure our national security in times of crisis or war by assisting the military and commercial sealift vessels. Some militarily useful vessels in the domestic fleet can be transitioned directly to military service when needed. In times of crisis, U.S.-flag government and commercial vessels, crewed by U.S. civilian mariners, transport supplies to U.S. troops in relief and war zones.

A significant number of graduates from these seven maritime academies enter the workforce as licensed deck or engineering officers. The new graduates are invited into an industry that is proud to provide a lifelong career path with good-paying jobs, mobility, and advancement. Additionally, a number of graduates choose to serve our nation as members of all branches of the military, especially the U.S. Navy and U.S. Coast Guard.
In order to sail as merchant marine officers, graduates are required to pass the extensive U.S. Coast Guard exam, which covers three days of testing along with the required encyclopedic knowledge of the career path chosen. For that reason, maritime academy cadets supplement their classroom instruction with significant time either on training ships operated by their schools or aboard commercial vessels.