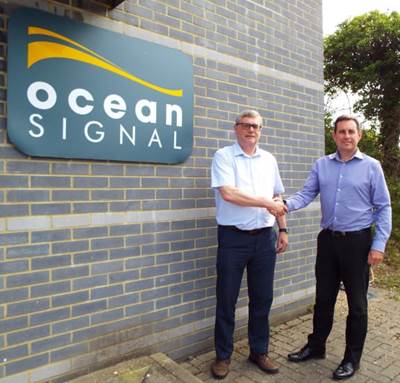 Alan Wrigley has announced that he is stepping down from his role as Managing Director of communication and safety at sea specialist Ocean Signal.

Wrigley, who has been involved in the marine electronics industry for over 41 years, has steered engineering-led Ocean Signal from a new company with a small portfolio of devices in 2011 to an international brand and world leader in safety beacon technology. It now supplies a range of ground-breaking products to the leisure, commercial and professional offshore sectors.

Wrigley will continue to work with Ocean Signal on special projects and on a consultancy basis, and leaves his position with confidence that the company will continue to strengthen and bring more innovative products to the market in the years ahead.

He said: “It has been a great experience to build the company to this stage and I step down with confidence that Neil will take us to the next level of growth and that Ocean Signal will continue to go from strength to strength. In a succession which has been part of our long-term business strategy, I am pleased to hand the reigns over to such an excellent choice for our new Managing Director who has a great deal of experience in the sector.

“Since we first established the company in 2008, the rate of growth of Ocean Signal has been phenomenal. During the years, we have expanded our production space and increased our personnel and in the last two years alone, the company has doubled in size. From our initial launch of products for the commercial market, we expanded into the leisure sector with our rescueME brand from 2013 onwards and then developed professional products such as our M100 MSLD and E101V float-free memory capsule for VDR. I am certain that our engineering expertise and focus on research and development will ensure that Ocean Signal will continue to bring innovative safety products to the market which will save lives.”

Alan Wrigley started in the marine industry in the 1970s with Racal Marine, engineering marine HF and MF equipment. He then became a director for Sharp Autopilots, before he left in 1984 to start the original Navico Ltd where he led the development of Axis VHF radios and was involved in the development of the first waterproof radio. Following Kongsberg Maritime’s acquisition of Navico, Wrigley became managing director of Simrad Ltd from 2000 to 2008.

New Ocean Signal Managing Director Jordan was appointed as the company’s Senior Project Manager in April this year. He has more than 20 years’ experience in the maritime and land electronic safety beacon industry, with expertise in areas including Cospas-Sarsat 406MHz beacons, AIS man overboard devices, VHF and satellite communications products.

Ocean Signal products are now supplied to more than 40 countries for commercial, fishing, recreational and professional users and are also endorsed by a number of high-profile sailors, rowers, surfers and powerboat racing teams. It has just been announced that in this year’s Clipper 2017-18 Round the World Yacht Race, the award-winning Ocean Signal rescueME MOB1 AIS man overboard device will be integrated into all crew life jackets to enhance safety standards.

Since its acquisition by Drew Marine Ltd in May 2015, Ocean Signal has reported an increased rate of growth while operating as a unit of Florida-based ACR Electronics, Inc., a move combining two of the most highly experienced electronic engineering teams in the marine communication industry.