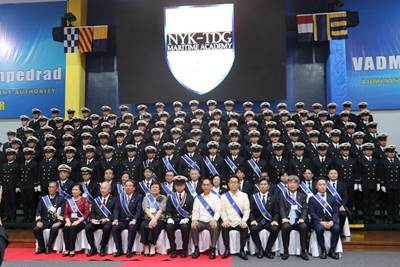 On June 7, 2022, a graduation ceremony at the NYK-TDG Maritime Academy (NTMA), a merchant marine university jointly operated by NYK and the Transnational Diversified Group (TDG) near Manila, Philippines, was held for the first time since 2019 before the outbreak of COVID-19.

The dignitaries celebrated the graduation of the 10th NTMA class, totaling 134 students, who had successfully completed the curriculum after being greatly affected by the nearly two-year COVID-19 pandemic that affected onboard training.

NYK was the first Japanese company to establish a maritime academy in the Philippines, and NTMA is currently celebrating its 15th anniversary since opening in 2007.  A total of 1,252 students have now graduated from NTMA since the academy opened, and most graduates are actively engaged as officers or engineers on NYK-operated ships. In fact, in April 2021 an NTMA graduate rose to the rank of captain of an NYK vessel for the first time, and in April 2022 an NTMA graduate became the first from the school to reach the rank of chief engineer on an NYK ship. Additionally, many of our graduates are active in important land positions that play a role in safe ship operations, and their fields of activity have spread to important bases such as Japan, Singapore, and Australia.