New Owner at the Helm of TowBoatUS Cape Cod 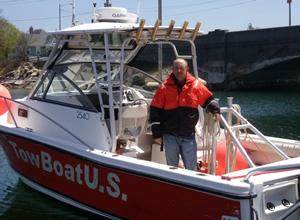 Capt. Shawn Brule, who retired from the U.S. Coast Guard last August after 22 years of service, is the new owner of TowBoatUS Cape Cod, an on water towing and assistance service for recreational boaters.

“I’ve always known I would own a boat towing company at some point in my life,” said Brule, who began working as a deckhand in a similar business when he was a teenager in Florida.

Brule, who was a senior chief boatswain’s mate, spent his entire Coast Guard career in New England waters, serving for the last five years as head of the Aids to Navigation Team out of the Boston station. He also worked at the Woods Hole Coast Guard station for a few years. “I know these waters well,” he said, referring to Buzzards Bay, the Cape Cod Canal and Cape Cod Bay, the area he serves.

Now he’ll use that local knowledge to come to the aid to boaters who get stuck on a sandbar, have an engine breakdown, need fuel, a battery jumpstart or other routine assistance. Much like an auto club for boaters, TowBoatUS offers nationwide on water towing plans for saltwater boaters and anglers for just $158 a year that includes BoatUS membership. Without a towing plan, boaters face costs that average $750 per incident nationally.

“This can be a tricky place,” Brule said, noting that current in the canal runs up to five knots, and a southwest wind often builds in the afternoon. With opposing wind and current, waves at the Buzzards Bay entrance can be standing six to eight feet. “People aren’t prepared for it, and sometimes their boats get swamped or even tip over,” he said. With his homeport at Onset near the western end of the Cape Cod Canal, Brule can be there to assist in a matter of minutes.

His boats, a 27-foot Boston Whaler with twin 350 horsepower inboard engines and a 27-foot Robolo with twin 250-horsepower outboards, are equipped with dewatering pumps, dive gear, lift bags, towing gear, battery jump packs and extra fuel. They are painted a distinctive red with the white TowBoatUS letters on each side and are on call 24 hours a day seven days a week. Brule, who is 42, is pleased that his son, a junior at Massachusetts Maritime Academy will be working with him this summer, and he has other captains in the pipeline to call on when needed. Brule’s girlfriend, Stacey Russell, another Coast Guard retiree, will assist with management.