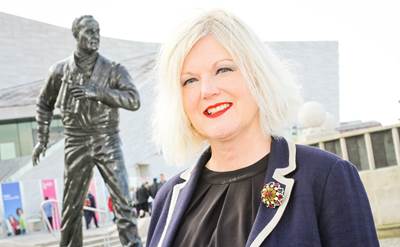 A new Liverpool City Region maritime academy is issuing a call to the public for Bootle related maritime memorabilia, especially if connected with the Battle of the Atlantic and its great hero, Capt Johnnie Walker.

Port Academy Liverpool (PAL), which will be based in Capt Walker’s former homeport of Bootle opposite his home on Pembroke Rd, wants to create the best possible archive to celebrate Bootle’s illustrious maritime heritage and inspire young people into careers connected to the sea.

The multi million pound academy which will be part of Bootle’s Hugh Baird College, will be the only vocational college of its kind in the North of England offering courses for students aged 14 to adulthood covering the full spectrum of the maritime sector ‘on-shore, offshore and on-board’ (see notes to editors).

PAL will open later next month during Seafarers Awareness Week and is backed by Liverpool City Region Local Enterprise Partnership (LEP), with support from the Royal Navy, Peel and Cammell Laird, which has donated a 7.5-ton anchor that will be dedicated to seafarers past, present and future.

Special guests at PAL’s opening will include those whose families have played a big part in Bootle’s maritime history such as Capt Patrick Walker, grandson of Capt Johnnie Walker, and the Earl of Derby, whose family was involved with much of the town’s Victorian development.

PAL Project Director Shulah Jones said a fundamental part of its role will be to tell stories of Bootle’s past and how the Merchant Navy and Royal Navy were intertwined with the community.

“The maritime sector is part of the DNA of Bootle and the Liverpool City Region,” she said. “We want to ignite a passion for careers in maritime by recognising and retelling the extraordinary stories of our own community. For example, the lionhearted war generation who gave so much to our city and country. By telling their stories we hope people will be inspired to consider careers in maritime literally opening up a world of opportunity. The fantastic thing about maritime is that it can provide well paid careers all over the world for people of all academic backgrounds on land and at sea from office work and professional services to engineering to seafaring.

Mrs Jones said crucial to the ethos of Port Academy Liverpool is the Bootle motto respice aspice prospice , which translates as ‘look to the past, look to the present, look to the future’.

“This is why we’re putting out a call to anyone who may have some memorabilia of Bootle’s Merchant and Royal Navy and local history, in particular anything linked with Capt Johnnie Walker and the Battle of the Atlantic, to donate to our archive. For example, 75pc of Bootle was destroyed, including the area around PAL, by the Luftwaffe during the May blitz as the town bore much of the brunt of the bombing such was its strategic importance. It was through Bootle’s docks that vitally needed resources were coming from America to keep Britain working. And of course it was from here that so many men and women risked, and gave, their lives boarding ships during the Battle of the Atlantic.

“We’ve already had great help from Sefton Council who curate Bootle Town Hall’s archive and Phil Parker, of Atlantic Container Line, which is a major user of the docks.

“It’s really interesting how you can take some incident from the past and grow people’s interest from there. One idea is for our students to interview local people about their memories. We aim to be a hub of all things maritime and want to start a history group.”

“Capt Walker’s former wartime family home, Flotilla House, is under a minute’s walk from the Academy, and has potential for telling a long term story to our students and visitors.

“The foundations of technical education college in Bootle were laid in 1892 and opened in 1900 by the 15th Earl of Derby. Therefore, it is very fitting that Edward Stanley, the present and 19th Earl of Derby, joins us at the official opening as we look to the future.

“We believe Capt Walker and another great Battle of the Atlantic hero Admiral Sir Peter Gretton justly deserve great recognition for Bootle, Liverpool and Great Britain. Therefore, they are the best role models imaginable for the ambition and commitment we are trying to achieve.”
America • Merchant Navy • Royal Navy
Email