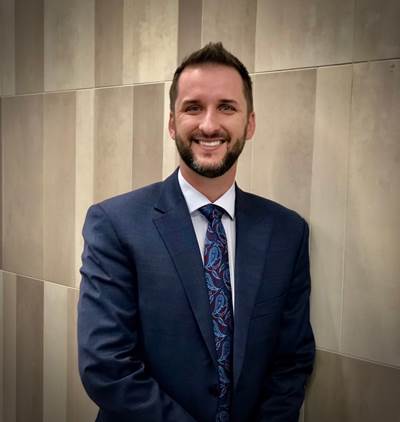 The Marine Technology Society announced that Chris Ostrander was selected as the organization’s new executive director, effective March 8, 2022. An oceanographer and business development executive, Chris has more than 15 years of experience in building and leading complex organizations, advancing mission-driven partnerships, and guiding durable growth for a range of academic, government, and private organizations.

“After a comprehensive search, we are elated to have Chris lead MTS as the organization’s new executive director. It is a time of growth and acceleration for our organization fueled by the significant advancements in the new blue economy, and Chris’ exceptional background in both marine technology and organizational leadership will propel MTS into the future. We are excited to have him begin working with our members and partners,” said Zdenka Willis, MTS President.

“I’m thrilled to join the Marine Technology Society and to work alongside our extraordinary members and staff to advance the public understanding of marine technology and to elevate awareness of the importance of marine technology to our collective well-being. I believe that finding solutions to many of society’s toughest environmental challenges — spanning energy production, climate adaptation and mitigation, fisheries, and ocean and marine health — depends on the robust development, deployment, and sustained advancement of marine technologies,” Chris said.

Prior to joining the Marine Technology Society, Chris served in a range of leadership roles at the University of Utah spanning technology licensing and commercialization, industry partnerships, foundation & corporate philanthropy, and research administration. Before his time at the University of Utah, Chris served as the assistant dean and director of strategic initiatives for the School of Ocean and Earth Science and Technology (SOEST) at the University of Hawaii at Manoa. While in Hawaii, he was the co-founder and director of the Pacific Islands Ocean Observing System (PacIOOS). He has launched three companies and helped entrepreneurs and institutions raise more than $450 million in research and philanthropic capital.
As a researcher and principal investigator, he has published two dozen book chapters, scientific papers, and technical reports spanning marine biology, ocean physics, marine conservation, domestic policy, and operational analysis. Chris has extensive experience on the international stage—working across the Asia-Pacific region in partnership with APEC members, UN programs, and myriad foreign and US government agencies. He has served as a formal marine science advisor to state, territorial, and federal agencies, including as a founding member of the U.S. Integrated Ocean Observing System (IOOS) Advisory Committee.

Chris received his undergraduate and graduate education from the United States Military Academy at West Point (geography), the Johns Hopkins University (political theory), and the University of Hawaii (physical oceanography).

“MTS and its members are recognized as global leaders in the development and use of marine technology to support applied research, public policy development, and the blue economy. I look forward to joining our members and partners to support the growth of the Society, the success of our members, and to deliver value and generate impact across our sectors,” Chris said.