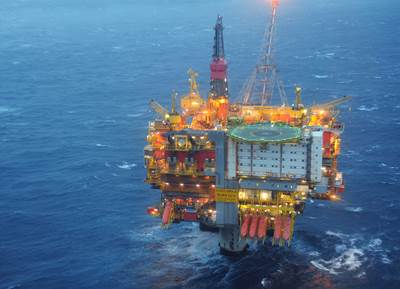 Energy firms operating offshore Norway on Wednesday agreed wage deals for 2017 with the two largest trade unions representing oil and gas workers, while talks with a smaller union will continue at a later stage under mandatory mediation rules.

Industri Energi and Safe, representing some 87 percent of Norwegian oil workers, said the outcome of the talks was disappointing, but added they had nevertheless accepted it as they did not have the right to go on strike this year due to a clause in last year's agreement.
Lederne, a third union representing some 13 percent of Norwegian oil and gas workers or about 1,000 people, does have the right to go on strike, and said it had rejected the oil firms' offer.
Under Norwegian law, the talks involving Lederne will now proceed to a state mediator, which must be conducted before any strike is allowed.
Norway is western Europe's top oil and gas producer with daily output in April of around 2.1 million barrels of oil, condensate and natural gas liquids, as well as natural gas corresponding to about 1.7 million barrels of oil equivalent.
Top operators offshore Norway include, among others, Statoil , Aker BP, Total, Exxon Mobil , Shell and Centrica.

Miami shipyard RMK Merrill-Stevens says it is hiring 75 new employees over the next two months to staff its newly renovated North Yard and South Yard.