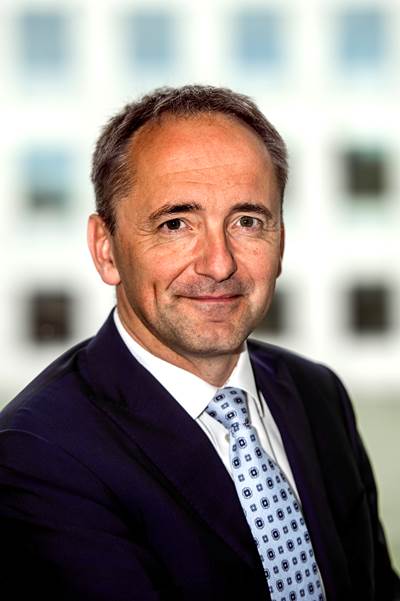 A.P. Moller-Maersk's new chairman committed to automating its systems as the oil and shipping group steps up its drive to become more efficient and save costs at a time of low oil prices and declining freight rates.
The more than 100-year-old conglomerate's digital push will mean that in theory, it should be as easy to book a container as booking an airline ticket, Chairman Jim Hagemann Snabe told Reuters shortly after he was elected.
"We transport goods in the physical world and that won't change as we won't start beaming things around the world," the former co-CEO of German software company SAP said.
"It is not about replacing the current product but about making it more efficient for the customer."
The container shipping industry has lagged some other sectors in bringing more of its processes online, and there is still a huge amount of paperwork slowing down the handling and tracking of containers. Added to that, hardly any two ships have the same IT systems.
U.S. technology company IBM and Maersk are cooperating to create a digital way of managing and tracking shipping transactions using blockchain technology.
But the most crucial task for the incoming chairman, who was recently also proposed as head of the supervisory board of German engineering group Siemens, is to deliver on the restructuring plan set out by new group Chief Executive Soren Skou in September.
This included bulking up the group's transport and logistics operations while seeking alliances or a separate listing for its capital intensive energy division.
Snabe replaces Michael Pram Rasmussen, who steps down after 14 years in the job.
"Jim is a man of the future, I firmly believe in that ... I hope that technology will play a bigger role than it has played so far in our business," said Ane Maersk Mc-Kinney Uggla, Chairman of A.P. Moller Holding.
A.P. Moller Holding, wholly-owned by a fund established in 1953 by the founder of A.P. Moller Maersk, owns 41.5 percent of shares and 51 percent of voting rights in the listed company A.P. Moller-Maersk A/S.
In December, Moody's downgraded Maersk's credit rating to Baa2 from Baa1 with a negative outlook, following Standard & Poor's cut to BB from BB+ with a negative outlook in November - both close to the lowest investment grade levels. Below those levels, Maersk's borrowing costs would rise.
"We will use different tools, in particular increased capital discipline but also the possibility of divestment," outgoing chairman Rasmussen said.
(By Stine Jacobsen)
Moody's • Siemens • Soren Skou
Email