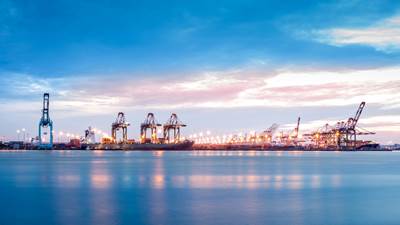 The head of an American mariner union says state leaders in New York and New Jersey should recognize the essential role of U.S. seafarers by prioritizing them for COVID-19 vaccination.

The Washington Post, in a recent front page Sunday Business story headlined Essential, Invisible, described how “states have been hit-or-miss on vaccines” for merchant mariners and that for most of the people who go to sea, the process can be described as  “you’re on your own.” New York and New Jersey are two of the states where seafarers have not been prioritized, and few seafarers in those states have been inoculated against COVID-19, says Captain Don Marcus, the president of the International Organization of Masters, Mates & Pilots (MM&P), the union which represents captains and deck officers on U.S.-flagged vessels.

Mariners are “a special case that needs special attention”, Marcus wrote in a recent letter to Gov. Phil Murphy of New Jersey and Gov. Andrew Cuomo of New York. “We don’t have ventilators or doctors on containerships and foreign governments often won’t let our crews travel to hospitals.”

This is not the first time that maritime union leaders have reached out to the New York governor, who also serves as the chair of the National Governors Association (NGA). Last January, Marcus, joined by leaders of seven other maritime unions, appealed for Cuomo’s help as the leader of the NGA, to get the vaccine to “the approximately 14,000 U.S. citizen merchant mariners who are responsible for keeping the economic and military supply lines of the United States open on the high seas.”

The organizations that signed the letter also listed union hiring halls and other facilities near key ports that could be used as clinics to administer the vaccine, including a site in Jersey City, N.J.

Help, still much needed, has not arrived.

The risks to mariners are not theoretical, says Captain Thomas Larkin, vice president for Atlantic Ports for the MM&P. Larkin works in Newark, N.J.

“There have been a number of outbreaks of COVID on U.S. vessels,” Larkin says. “The virus can spread rapidly on our ships where we work and live in close quarters with crew from multiple age groups.”

In addition to the high risks they endure, mariners face far more complications in scheduling appointments to be vaccinated than most Americans do, Larkin says. “Our members travel to and from their jobs aboard ship. They do not have the ability to schedule appointments for multiple vaccinations with certainty.”

Despite U.S. vessels being essential for serving U.S. military bases overseas and supplying entire states such as Alaska and Hawaii, the federal government has delegated the responsibility of vaccinating the Merchant Marine to the states and their governors.

“The only way that we’re going to get enough shots in arms of seafarers is if we have action by the governors,” Marcus says. “We know that we’re often out of sight. We don’t want to be out of mind.”

Decom North Sea (DNS), a UK-based body dedicated to the oil and gas decommissioning sector, has announced the appointment of Fraser Moonie…

Training Tips For Ships - Tip #23: Is Your Training Technology Disaster-Ready?