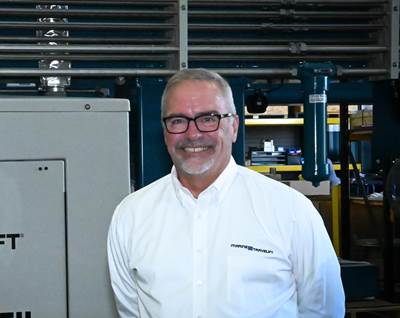 The Marine Travelift/Shuttlelift/ExacTech, Inc. family of companies announced Kurt Minten has been promoted to Executive Vice President of Marine Travelift. As the longest tenured employee in Marine Travelift history, Minten has many years of experience in all aspects of the business and has held positions in both engineering and sales leading up to this promotion.

Minten’s experience with Marine Travelift began even before he was an employee of the company. Early in the company’s history, engineering services were outsourced to a local company called RA Stearns, which is now known as Bay Engineering. Minten worked as a drafter at Stearns and was assigned to the Marine Travelift product line in 1981.

When Marine Travelift developed its internal engineering team in 1986, Minten was hired as one of two people in the department, and he worked in that role until 2005. At that time there was an opening for a salesperson as the company was expanding its industrial division with the Shuttlelift Carrydeck and gantry crane lineup. The engineering department had grown significantly by this time and Minten, with his extensive knowledge of the company and products, moved into that sales role.

Minten was head of Carrydeck sales and was a major contributor to the success of that product line. He then grew into the Director of Shuttlelift Sales and eventually started handling contracts on the Marine Travelift side as well. Additionally, Minten collaborated and supported various departments while in these positions with his natural ability to lead. He most recently held the position of Vice President of Sales on his way to this well-deserved promotion.

Erich Pfeifer, President & CEO, Marine Travelift, said, “Anyone who has had the privilege of working with Kurt knows he is the epitome of a team player and is as professional as they come. He takes the time to talk and get to know everyone he comes across and leaves a lasting impression on customers and coworkers alike. We as a company are fortunate to have Kurt as a leader, coworker, friend, supporter, and more, and we look forward to having him in this new role for the years to come.”