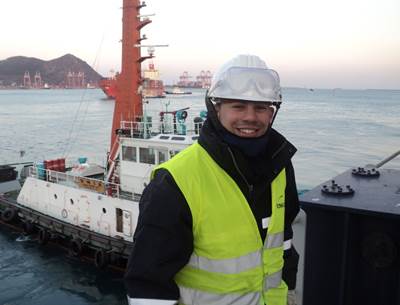 The “hard work and dedication” of a 25-year old Merchant Navy officer cadet has been recognized with an award that will be presented by the U.K. Shipping Minister at a ceremony in London tomorrow, Wednesday, October 15, 2014.

Jonty Turnbull of Blackpool and the Fylde College, who was serving on-board the Foreland Shipping-owned vessel, MV Hartland Point, is the 2014 winner of the Maritime and Coastguard Agency’s (MCA) Officer Trainee of the Year Award.

The award will be presented at Haberdashers Hall, London, by the Rt Hon John Hayes MP, Minister of State for Transport, who said, "I am delighted to attend the ceremony tomorrow. It is so important that we celebrate these achievements, not just for the individuals involved, but to ensure we all share in the pride and grow through the success of all the winners. The esteem in which the U.K. maritime sector is held worldwide is itself a celebration of our maritime heritage - past, present and future."

The award aims to encourage and recognize quality within the maritime industry, which is important to the U.K. economy, contributing around £14 billion per year. An essential component of the U.K.’s success in this sector is the maritime training programs available to new seafarers.

Nominations are made by nautical colleges alongside the trainee’s sponsoring company. The winner is decided by a panel of judges, which includes representatives from the MCA and other industry figures.

The Master of the MV Hartland Point, Captain Kevin Foulkes, said, “I am delighted that Jonty Turnbull has been recognized for this award, which is very well deserved. Jonty has currently stepped up to do the Second Officer role for a period of time and has taken this very much in his stride. He continues to impress colleagues with his hard work and dedication to the job.”

In its citation, the judging panel said that they were “very impressed with Jonty and his achievements” and that, “his drive and enthusiasm for the Merchant Navy really stood out.”

Julie Arnold, Training and Cadet Manager from Bibby Ship Management said, “I am really proud of Jonty as he was an outstanding Trainee Officer to mentor throughout his three year cadetship. He has worked relentlessly and we are proud of the fact that he represented Bibby Line Limited so well! We aim to provide excellent training to all our Trainee Officer’s to the highest standards and Jonty’s MCA Trainee Office of the Year Award highlights the fact that we’re on the right lines.”

Sir Alan Massey, Chief Executive of the MCA, will attend the ceremony. He said, “Having high-caliber officers is vital to the future health of the UK shipping industry. At the Maritime and Coastguard Agency we are committed to recognizing and promoting excellence and are therefore delighted that this year’s award is going to such a deserving candidate. I wish Jonty every success for what I am sure will be a very impressive career.”

Wärtsilä has launched a new LNG Bunkering & Supply System simulator. The simulator will promote greater safety on board liquefied…