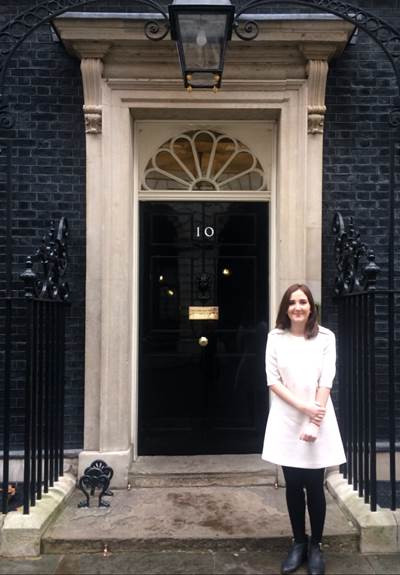 Mersey Maritime Apprentice Olivia (Livvy) Weston got a chance to visit No.10 Downing Street and the House of Commons after meeting the Shipping Minister, John Hayes, MP on an official visit.

The 18-year-old Apprentice, who has been with Mersey Maritime since finishing her A-levels last year, spent a day in Westminster. She visited Hayes at the Department for Transport, watched a Parliamentary debate in the House of Commons and had her photo taken in front of the famous black door of No.10 Downing Street.

Former Halewood Academy pupil Livvy said, “I felt very privileged meeting Mr. Hayes and visiting Parliament. His staff were extremely kind in showing me round and talking to me about their work supporting Government. It’s certainly something I’ll remember forever!”

The Shipping Minister is very supportive of apprenticeships following his time as Minister of State for Further Education, Skills & Lifelong Learning in 2010. Livvy’s invitation to visit Parliament followed a visit to Mersey Maritime by Hayes.

Hayes said, “Apprenticeships are incredibly important for today’s young people and I was delighted to be able to support and encourage Livvy. I hope she found her trip interesting and beneficial.”

Mersey Maritime is a strong advocate of apprenticeships and took Livvy on as its first apprentice in September 2014. Following the apprenticeship, Livvy will qualify with a City & Guilds Advanced Level 3 in Office Administration & Marketing.

Chris Shirling-Rooke, Acting CEO at Mersey Maritime, said, “The Shipping Minister is always very supportive of Mersey Maritime and we cannot thank him enough for inviting Livvy to Westminster. It was a very generous gesture.”