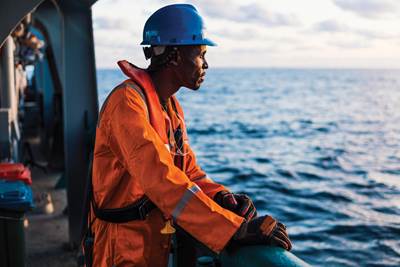 On 24 January, the IMO issued updated guidelines on fatigue.  This is just another in a long series of band aids that attempt to cover over the problem without providing a solution.

Fatigue is a long-standing weakness in the maritime industry.  It is recognized as a major or contributing causal factor in the majority of maritime casualties.  As is well-known, fatigue is caused by a lack of sleep and relaxation.  These, in turn, are the result of too few people being tasked with too much work.  Guidance on how to recognize and manage fatigue is meaningless.

The root cause of fatigue among the personnel on merchant vessels is that those vessels are insufficiently crewed.  The minimum manning levels recommended by the IMO and mandated by flag administrations are inadequate and have been so for years.  No one ship operator can afford to crew its vessels above the minimum level because that would put those vessels at an economic disadvantage against its competitors.  All vessels operating in similar trades must increase their crew levels simultaneously.

Attempts at fatigue management
The IMO and the flag administrations have taken a helpful step in addressing the fatigue problem by establishing maximum work hours and minimum rest hours.

In 1997, the IMO adopted major amendments to the International Convention on Standards of Training, Certification, and Watch keeping for Seafarers (STCW Convention), along with the accompanying STCW Code.  Among other things, the Convention stated that each Administration shall, for the purpose of preventing fatigue, establish and enforce rest periods for watch keeping personnel.  The Code was more explicit, stating that watch keepers shall be provided a minimum of 10 hours of rest in any 24-hour period and not less than 70 hours of rest in each seven-day period.  The 2010 Manila Amendments to the STCW Convention and Code, which came into effect on 1 January 2012, expanded the rest requirement to a minimum of 77 hours in any 7-day period.  Administrations are further enjoined to require that records of daily hours of rest of seafarers be maintained in a standardized format to allow for monitoring and verification of compliance by the Administration and during port state control examinations.

The US National Transportation Safety Board (NTSB) has long-recognized the dangers presented by fatigue in the transportation sector.  It stated in a recent report: Because “powering through” fatigue is simply not an acceptable option, fatigue management systems need to allow individuals to acknowledge fatigue without jeopardizing their employment.  Likewise, the UK Maritime and Coastguard Agency (MCA) considers seafarer fatigue to be a potentially serious issue which is detrimental to safety at sea and the health of seafarers.

Everyone has experienced fatigue at some point, but in the transport industry, where there’s often high pressure to deliver, fatigue can have very real, very dangerous implications.  Fatigue can have a range of adverse influences on human performance, such as slowed reaction time, decreased work efficiency, reduced motivational drive, and increased variability in work performance.  Fatigue can lead to lapses or errors associated with attention, problem-solving, memory, vigilance and decision-making.  Most people generally underestimate their level of fatigue.  Studies have found that people experiencing fatigue are not able to evaluate accurately their own fatigue level or their ability to perform. Instead, they tend to overestimate their abilities.

The time is overdue for flag administrations and port state control regimes to vigorously enforce those record keeping requirements.  There are suspicions that, on many ships, the watch keeping hours are under reported and the hours of rest are over reported.  Only detailed and careful review of those records can reveal the truth.

Crewing Levels
Only when the crewing level of ships is increased to an appropriate level will crew fatigue become manageable.

The IMO should immediately undertake a thoughtful analysis of vessel crewing requirements.  Technological advancements may have reduced the level of physical labor on ships, but it has had minimal impact on work hours.  For example, ECDIS, when operating properly, may have made it easier to identify where a vessel is located.  The watch officer is still expected, nay, required to verify this visually and by radar.  Instruments may tell the engineer that a motor has failed, but repairs must still be done manually.

Vessel owners and operators for years have pushed, successfully, for reductions in minimum crewing levels.  The time has come for flag administrations, port states, and the IMO to push back. Covering over the fatigue problem with yet more management guidance is not a solution.