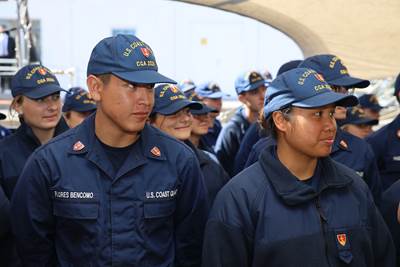 Last May, the U.S. Coast Guard Academy (CGA) announced that 240 new officers made up its 140th graduating class.

The Academy’s announcement referenced additional, important highlights. Women made up 34% of the Class of 2021, and 34% of the graduates were from underrepresented minority groups. Even more focused was the statement that 22 African Americans “walked the stage,” the largest number in Academy history, and 2021 included the second highest number of Asian American and Pacific Islanders.

To make the ceremony even more memorable, President Biden delivered the keynote address. Indeed, in his remarks, the President noted and commended the Academy’s diverse student mix. He told the cadets, “You’re joining the service that not only serves as America’s front line, it increasingly looks like America.”

The ideal that American institutions should proportionately reflect America’s racial and ethnic diversity is not new, but President Biden’s directives have surely recharged that goal.

This article takes a closer look at minority student recruitment and graduation at the Coast Guard Academy and the state maritime academies. All of the state academies were contacted – as well as the U.S. Merchant Marine Academy, in Kings Point, N.Y. – but not all responded.

This report seeks to present a big-picture look within university-level maritime education, particularly among Black students, so specifically referenced within the CG’s graduation announcement. We asked colleges: How have recent recruitment efforts changed? Are future classes trending to reflect America’s mosaic of people and races?

Importantly, state school systems will largely reflect the demographics of the state. Black Americans, for example, make up 13.4% of the U.S. population (2019 U.S. Census estimates). State and regional statistics, however, vary. In Maine, for example, Black people make up 1.7%—about 22,000 individuals— of the state’s population of 1.34 million. With diversity and inclusion, numbers are not the whole story, but still critical for a big picture.

The U.S. Coast Guard Academy
Capt. Michael Fredie is the CGA’s Director of Admissions. Fredie said that 11 years ago the Academy’s “under-represented minority population” was 11%. “Now we’re at 36%,” he said.

The Academy currently has 1,072 students among all classes, Fredie said. Sub-groups are as follows:

Fredie, who graduated from the Academy in 1996, was similarly influenced by the presence of Black officers. “My story is not much different from most. So, I can confidently say it’s a big influence when you see somebody who looks like you doing the mission and carrying out the job; it’s influential and helps you better understand a level of belonging.”

For CGA, recruitment starts with freshmen and sophomores. “That plants a seed,” Fredie said, keeping the Academy in a student’s mind and allowing enough preparatory time to qualify for admission. The CGA admits 250-290 students/year, in contrast to around 1,500 cadets at the other U.S. military academies. In addition, CGA’s academic program is limited to nine majors, from STEM and engineering to business and government. These factors result in a relatively small candidate pool and proportionally fewer minority applicants.

On retention, Fredie referenced the current new class of 285 students—40% women and 37% underrepresented minorities—as an example. Just six students left after the intense “Swab Summer” session. “That’s the smallest number ever to drop out during the initial Academy indoctrination period,” Fredie said.

“Every single student that’s been appointed has been seen as being capable of making it academically, militarily and physically,” Fredie emphasized. “It hurts when that doesn’t happen, but our goal is to provide as much support as possible to get every single student to graduate. We need them in the fleet!”

Fredie noted that discussions about recruitment and race must be kept in larger context. “Diversity is a critical element in ensuring we are properly prepared to effectively carry out the Coast Guard’s missions.” Nevertheless, a student must demonstrate academic readiness and leadership potential. If not, “then we’re not able to make an appointment,” Fredie said. 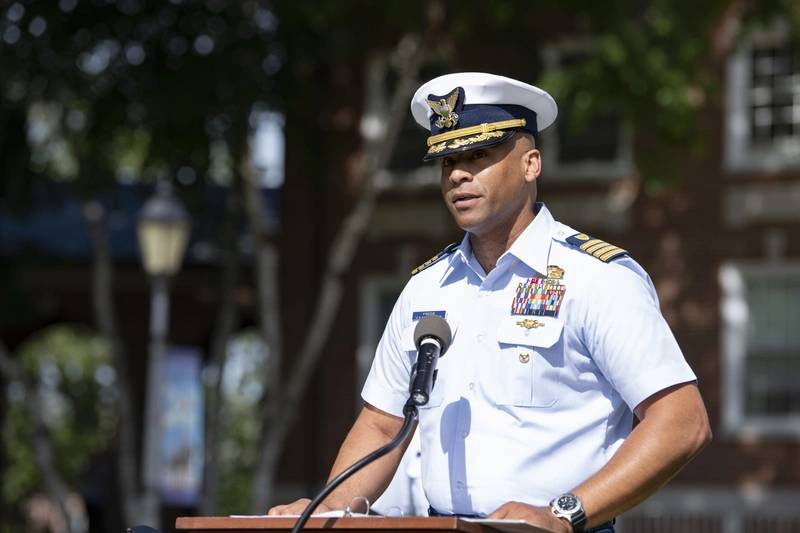 Capt. Michael Fredie is the CGA’s Director of Admissions. Fredie said that 11 years ago the Academy’s “under-represented minority population” was 11%. “Now we’re at 36%,” he said. (Photo: U.S. Coast Guard Academy)

California State University Maritime Academy
Cal Maritime is in Vallejo, on the northern end of San Francisco Bay, the only one of the U.S. maritime academies on the West Coast. This year Cal Maritime has 907 students, a bit lower than the average, around 1,000. The school offers a range of undergraduate degrees, from business administration to engineering to oceanography; it offers a master’s degree in transportation and engineering.

In 2020-2021, for summer, fall and spring, Cal Maritime awarded 138 undergraduate degrees. (See summary table below.) Women made up 17% of undergraduates. Most students come from California.

This class, for all groups of students, was small due to COVID; in three of the four prior years, for example, there were five Black graduates.

However, the total number of “Under-Represented Minority” (URM) students was much higher: 343 (38%). Retention rates are similar for all Cal Maritime students meaning minority graduation is trending upwards, although slowly. For 2022 to 2024 the school expects 40 URM graduates each year. If Black students comprised 2.3% of that total (120) that means between 2-3 Black graduates each year.

Maria L. Martinez, PhD is Associate VP for Enrollment Management at Cal Maritime. She was asked to summarize the school’s recruitment efforts, eventually to reach a student body that reflects overall racial and ethnic demographics.

Martinez said that California state universities, including Cal Maritime, use a systemwide initiative focused on URM students. COVID interrupted the use of SAT and ACT test scores. Cal Maritime, along with the other 22 state universities, adopted a “Multi-Factor Admission Supplemental Criteria.” This expands the review of students with GPAs below established thresholds, looking closely at participation “in educational programs heavily participated (in) by racially diverse students and students from various socio-economic backgrounds,” Dr. Martinez said. She added that this review “allows Cal Maritime to consider the potential for success of students in an environment that emphasizes hands-on learning and the development of leadership skills for maritime-related careers.”

COVID-19 made virtual campus visits more common. In some ways, virtual admissions marketing “levels the playing field,” Martinez commented, because it gives under-represented applicants the ability to “visit” and learn about Cal Maritime. 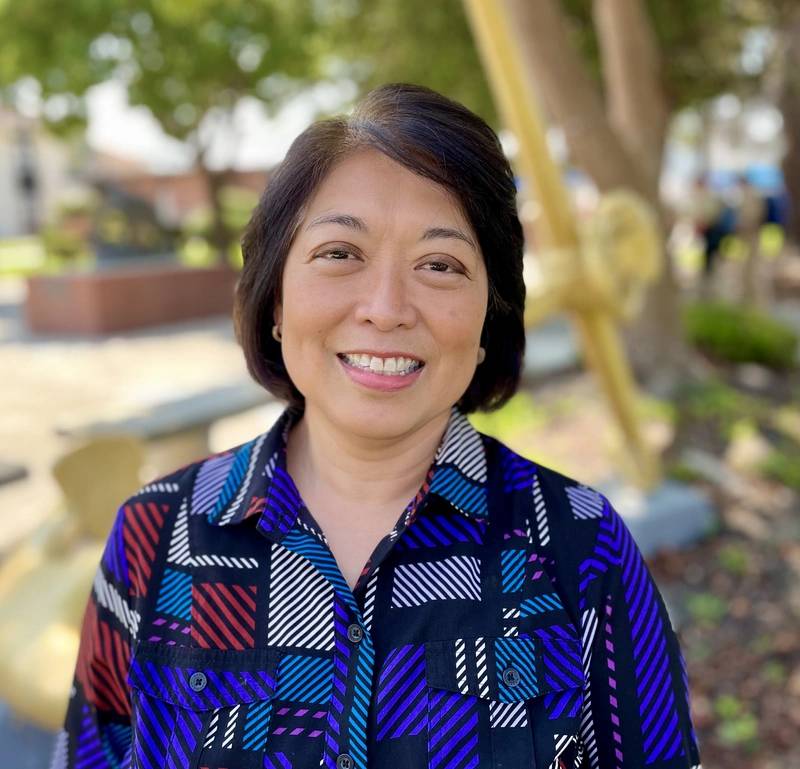 COVID-19 has made virtual campus visits more common. In some ways, virtual admissions marketing “levels the playing field” because it gives under-represented applicants the ability to “visit” and learn about the school, said Maria L. Martinez, PhD, Associate VP for Enrollment Management at Cal Maritime.

Ortiz said that Mass Maritime has worked to gain a close understanding of the emerging generation of high schoolers. He said that “equality, inclusivity, stability and opportunities” are valued by students today and “therefore we have changed our initiatives and messaging to promote social mobility.”

As a state university, most of Mass Maritime’s enrollment comes from Massachusetts, Ortiz said. Overall, the state’s high school population is declining; however, the percentage of Black and Latinx students is rising. “Our strategy,” Ortiz explained, is to “promote access and opportunity particularly in the twenty-six Massachusetts Gateway cities;” those are mid-sized cities such as Barnstable and Lowell and Springfield, urban centers at the core of larger economic regions.

Outreach programs are important and include leadership training, college admissions workshops and campus visits. Recently, for example, 12-to 16-year-old inner-city students spent a day on campus participating in team building activities, knot-tying, experiencing the ship simulator, and hearing from cadets. “The goal,” Ortiz explained, “is to have fun, learn, and increase awareness of opportunities at Mass Maritime.”

Black students complete MMA’s four-year program at a rate close to all other students (approximately 80% retention vs 85%, respectively). 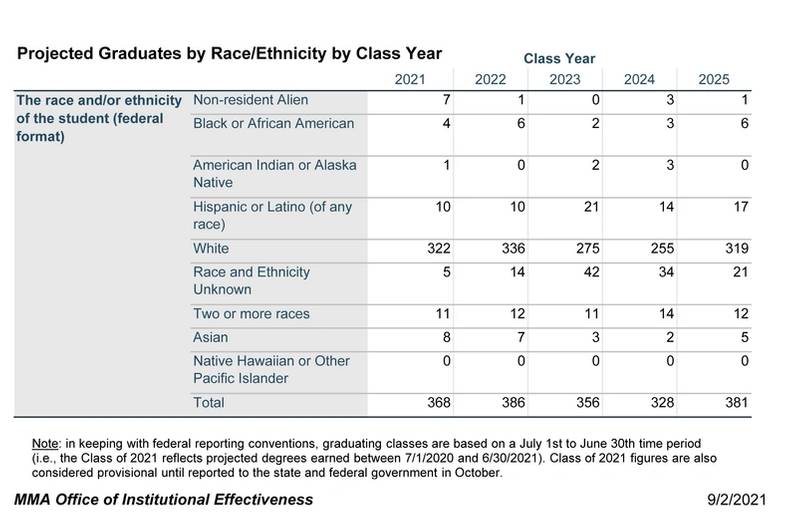 Janet Acker is Chief of Staff and Executive Assistant to the President of Maine Maritime Academy. She explained that Maine Maritime is focused on encouraging young women to pursue maritime careers. Additional recruitment efforts focus on Maine’s Native American Tribes, and, nationally, Black students from across the country.

COVID changed recruitment practices. “We look to place ourselves where the students go: that’s online”, Acker said. Online access in rural areas is a challenge, Acker noted. Some students depend on school Wi-Fi; some just have a cell phone. “We have to be friendly and accessible on all platforms,” Acker said. Even with an online presence, campus visits are especially important. Acker noted that, “we hope to be able to show interested students from all backgrounds how our special brand of hands-on education can be so rewarding.”

Maine Maritime currently does not require test scores. Many students are first-generation college students who have had challenging experiences during high school, particularly with balancing work and school and preparing for college.