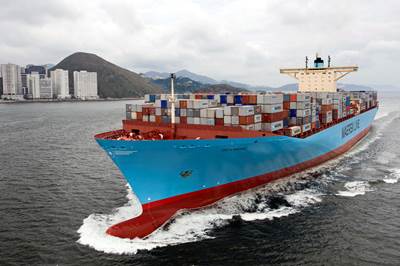 Maersk Line, the world's largest container shipping company, said on Wednesday it will slash costs, cut staff by almost a fifth and pull out of vessel orders as trade along the busiest routes in the world, from Asia to Europe, slows down.
The business, part of the A.P. Moller-Maersk conglomerate, is a bellwether for global trade and the shipping industry, which is run mainly by unlisted companies not required to make their assessments or financial circumstances public.
The plans come two weeks after A.P. Moller-Maersk cut its 2015 profit forecast by 15 percent, blaming a slowdown in the container shipping market.
Maersk will report its third quarter earnings on Friday.
"A number of markets have disappointed with a lot weaker demand than expected this year," Maersk Line Chief Executive Soren Skou told reporters on a conference call.
"And it's first of all Asia to Europe, which has had negative growth. Europeans have been importing less this year from Asia than last year and that was frankly a surprise."
Raw material trade routes, such as West Africa and the east coast of Latin America, had also slowed, Skou said, because "what went up with China, went down with China," Skou said.
China's factory activity fell for an eighth straight month in October, a private survey showed on Monday, pointing to continued sluggishness in the world's second-largest economy.
The cost of transporting a container has slumped this year compared to already weak previous years due to overcapacity in the shipping market as trade volumes failed to recover from the 2008 financial crisis.
Weekly freight spot rates on Asia to Europe routes have been languishing below $1,000 per 20-foot container, according to the Shanghai Containerised Freight Index, spending all but five weeks of the year at or below levels deemed profitable.
Shipowners "Digging Their Graves"
Maersk Line said it would save $250 million in the coming two years and reduce its workforce by 17 percent or 4,000 people, mainly through attrition. Its shares jumped on the announcement and they closed 3 percent higher.
The company, with a fleet of 600 ships, ordered 27 new vessels this year, including 11 of its flagship Triple E mega-vessels that can carry about 20,000 20-foot containers, with an option to order eight more.
Now it says it will not exercise the options, including on six of the largest ships. The orders would have gone to Korea's Daewoo Shipbuilding and Marine Engineering Co and China's Cosco.
Overcapacity has long been a problem in the industry and has been exacerbated by companies ordering new mega-vessels, rushing to place orders before new environmental regulations take effect next year, said Jan Tiedemann, an analyst with shipping consultancy Alphaliner.
"Shipping companies definitely ordered too much because they tried to get these ships with a Tier II compliance," Tiedemann said, referring to the new international regulations aimed at cutting nitrogen oxide emissions.
"What happens now is some who optimistically have done that are getting cold feet. They thought maybe we can get away with it - the ships will be delivered in 2017, the market would have recovered by then and now they say, 'we're digging our own grave'."
Maersk Line said it had not gone on a buying spree to avoid the regulations, noting its previous order for new ships was in 2011.