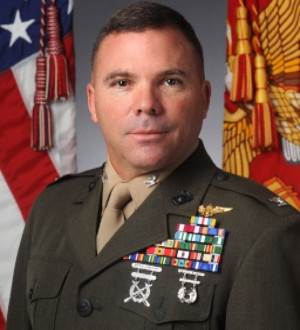 Marine Corps colonel selected as new liaison to Port of Long Beach Board
U.S. Marine Col. Richard Jordan was selected by the Long Beach Board of Harbor Commissioners last week as the new Chief of Staff, to assist the Commission in making key decisions in governing the Port of Long Beach.
Jordan most recently served as Director of Enlisted Professional Military Education at the Marine Corps University in Quantico, Va., overseeing approximately 280 Marines and civilians at six educational academies around the globe. Previously, he was the Strategy and Policy Division Chief for the Middle East for the United States Central Command, from June 2011 to June 2014. In that role, he interacted on a daily basis with civilian leadership from the Office of the Secretary of Defense.
He was promoted to colonel in 2011, and has been responsible for as many as 400 Marines. He deployed to Iraq as part of Operation Iraqi Freedom in 2003, 2005 and 2008. From 1993-1999 he served with a Marine Light Attack Helicopter Squadron. He joined the Marines in 1990, starting at Camp Pendleton in San Diego County, where he studied to become a naval aviator and helicopter pilot.
The Chief of Staff coordinates all administrative and communications functions for the Board, serves as a personal adviser on general issues, makes recommendations on public policy issues and coordinates trade missions and conferences, among other duties.
Jordan, who was born in Houston, graduated in 1990 from Sam Houston State University in Texas with a Bachelor of Science degree in Criminal Justice. In 2011, he earned a Master of Strategic Studies degree from the Air War College at Maxwell Air Force Base in Alabama.
Jordan is scheduled to start at the Port on Monday, Dec. 7.
Alabama • Harbor Commissioners • Middle East
Email