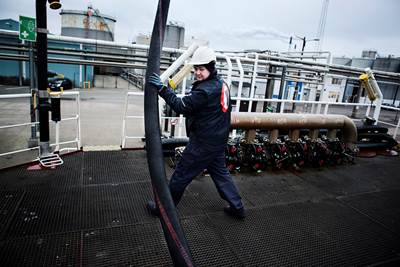 OW Bunker, a reseller and physical supplier of marine fuels, announced the appointment of Georgia Kounalakis to its physical supply operation in North America. Kounalakis joins the region’s senior team to take on responsibility for business development and help to drive further sales growth across North America, in line with the company’s global expansion strategy.

Kounalakis joins OW Bunker North America from Aegean Marine Petroleum Inc, where she most recently held the position of General Manager – Americas. Having joined Aegean in 2001 as a bunker trader in Greece, Kounalakis went on to become Regional Marketing Manager for Aegean Oil USA Inc before assuming her former role. At OW Bunker, Kounalakis will work within the company’s physical distribution business and will be based out of Stamford, Connecticut.

In recent months, OW Bunker has announced the start of physical supply operations in New York and New Jersey as well as at the ports of Los Angeles and Long Beach. It also offers physical distribution services offshore in the Gulf of Mexico.

Adrian Tolson, General Manager, OW Bunker – North America, commented, “We have developed both our trading and physical supply operations across North America quite rapidly and with great success over the past two years, helping us to forge a strong market position and clear identity in what is an extremely competitive market. We are seeing a clear demand from customers for high-value physical distribution services across North American ports, and we remain committed to providing them with the highest quality products and reliable, flexible solutions that help them to manage costs and operate most efficiently.”