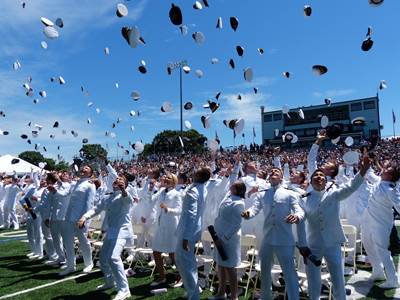 Graduates from USMMA celebrate graduation by tossing covers into the air. The class of 2014 from USMMA included 225 new Merchant Marine and Military Officers. (U.S. Navy photo)

"America is a maritime nation," said Howard. "Throughout times of peace and war, the graduates of the Merchant Marine Academy have served their country well on the seas, in public and private service. It is a privilege to address the class of 2014. They will continue a tradition of excellence and uphold the motto 'Deeds, not Words'."

USMMA is one of the five federal service academies. The school is funded by the Department of Transportation and has a mission to educate and graduate licensed Merchant Marine officers. Graduates from USMMA receive a Bachelor of Science Degree, an unlimited merchant marine officer license from the United States Coast Guard, and an officer's commission in one of the branches of the military.

USMMA graduates ensure a steady stream of merchant marine officers who support the nation's economic and security requirements in times of peace and war.

"For over seventy years, the Academy has trained leaders for careers at sea while instilling the values that allow them to become outstanding leaders in the maritime industry, the military and their communities," said USMMA Superintendent, Rear Admiral James A. Helis. I am especially proud of these new maritime leaders and am certain that they will continue to make us proud as they embark on a lifetime of service."