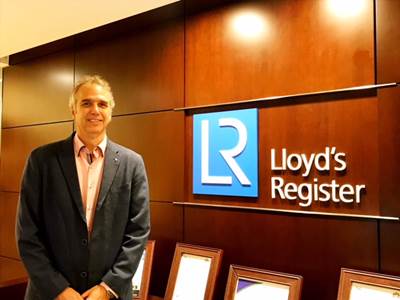 Lloyd’s Register (LR) announced that John Hicks is President of Americas Marine & Offshore. Hicks returns to the U.S. after two years of leading LR’s Global Passenger Ship Center in Trieste, Italy as Global Passenger Ship Sector Manager and Italy’s Marine Manager. Previously based in the U.S., he was Business Development Manager for the Americas as well as LR’s Applied Technology Group (ATG).

One of the key priorities for John in his new role is continued focus on LR’s expansion of its Digital Innovation services. This single platform works independently pulling from every data stream on the asset. This helps us uncover new insights that would be missed if we looked at all the data streams separately. Along with John’s extensive experience in the passenger ship segment –a major market in the Americas and for LR-we expect to further consolidate LR’s position as class leaders in the Cruise Ship Market.

Brown to Succeed Marsh as CEO at Lloyd's Register

After 14-years at Lloyd's Register (LR), including five years as group CEO, Alastair Marsh announced that he is stepping…