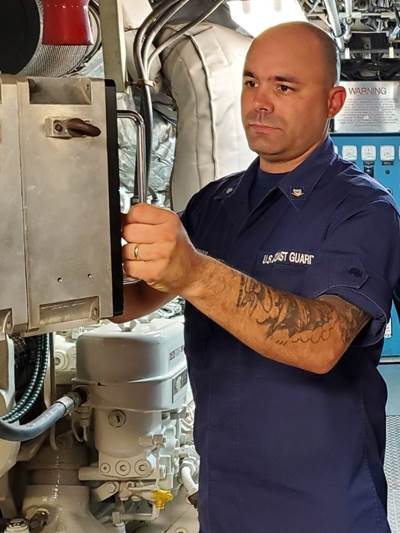 Petty Officer 3rd Class Morgan Harnay has gone from being a deck officer on super yachts to being a machinery technician in the Coast Guard. Harnay now spends his free time on liberty as a captain of a dinner cruise yacht. (Coast Guard photo courtesy of Sector Honolulu)

For some people, joining any military branch is never really a choice. They’ve dreamt of putting on the uniform since before they can remember. Others, it may be just a way to get out of mom and dad’s house once they graduated high school or out of a bad neighborhood.

For those who serve, there’s the obvious question once you complete a contract -- do I stay or go? Some can’t wait to return home after being away, and others are just ready to be in the civilian world again. Then, of course, you have those that decide to make the military a career. Going career happens in the Coast Guard more than any other branch with a retention rate steadily above 90 percent. Most people who join the Service, stay in the Coast Guard, even if that wasn’t their original plan.

For Petty Officer 3rd Class Morgan Harnay, his road to joining the Coast Guard is one-of-a-kind.

Harnay was born in a small town, Athis-Mons, which is about 40 minutes south of Paris, France. For most of his life, he lived in a small fishing town -- St. Raphael in southern France. There are several historical connections to the U.S. and World War II in the area, but being a member of the U.S. military was never even a thought to Harnay growing up much less a possibility.

Living near the water, it was nearly inevitable he would make a life at sea one way or another. Eventually, he began working on superyachts. There aren’t any official agreed-upon definitions for these crafts, but the term is typically used to describe large luxurious, professionally crewed, motor, or sailing yachts ranging from 130 to 590 feet.

After years of working on yachts, Harnay received word the superyacht on which he was the first officer was up for sale. The crew was instructed to take the ship to the Miami boat show. This event happens to be one of the largest boat shows in the world. The superyacht was almost guaranteed to sell. 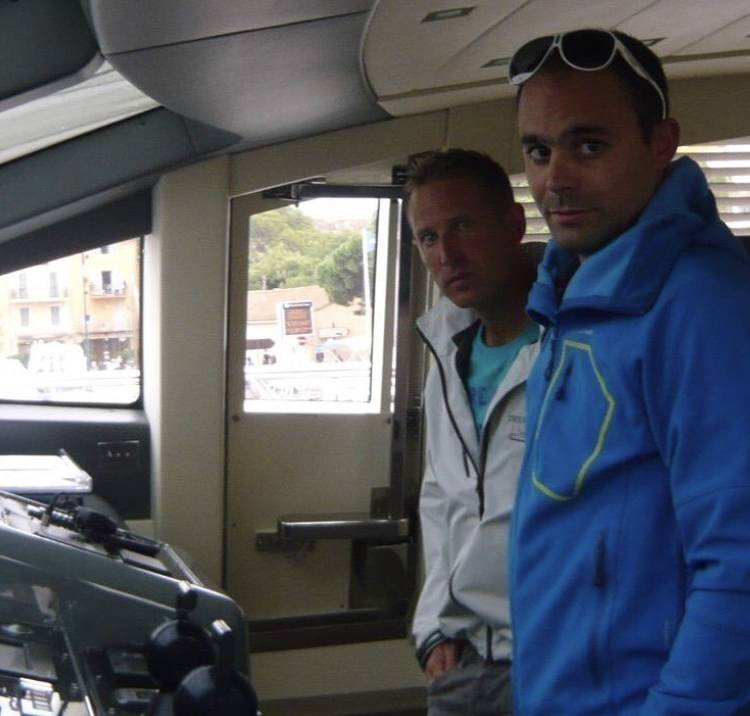 Petty Officer 3rd Class Morgan Harnay has gone from being a deck officer on super yachts to being a machinery technician in the Coast Guard. Harnay now spends his free time on liberty as a captain of a dinner cruise yacht. (Coast Guard courtesy photo.)

Harnay and the rest of the crew flew to Miami, and a few days later, the yacht arrived. It didn’t take long for it to go off the market. The ship sold to an American couple who gave the whole crew the option to return home or stay on working for them. He and a few other members quickly agreed. In doing so, the American couple agreed to sponsor the crew for green cards.

It wasn’t long after that Harnay received the news that due to the new owners being American and the vessel registry now out of the U.S., they were subject to U.S. regulations. One of those regulations was that Harnay was no longer qualified to be a deck officer on the yacht as he was not a U.S. citizen.

The owners wanted Harnay to stay, but unfortunately, after trying it out as a crewmember for about a year and a half, it just wasn’t working for him. The couple agreed they would still sponsor Harnay if he decided to leave his employment aboard the yacht.

“I took some time to decide what I wanted to do with my life,” said Harnay. There were lots of changes during this time. He was now married, had a child, and transitioned to making a living as a boxing coach.

After a year and a half in Miami, he began to miss life on the water and looked for ways to get back into the yachting world. That’s when a friend mentioned the Coast Guard. Three weeks later, he was speaking with a recruiter, and five months after that, he was standing on a yellow triangle enduring his first day in boot camp at Cape May, New Jersey.

“The first two weeks were interesting because my English was not what it is today. In Miami, it’s a lot of immigrants and a lot of different accents, which makes it easy,” said Harnay. “I was trying to copy what I was seeing around me. It took about two weeks for them to understand I was French.”

At that time, a 32-year-old Harnay had gone from being a first officer on a superyacht to a non-rated fireman who just graduated from boot camp with a core group almost half his age. After that, it was off to his first unit.

“I was sent to an ATON unit in Long Island, New York,” Harnay said. “I was a fireman, so I spent my time moving buoys around, swapping for the winter season and summer season. The transition was pretty hard, but that’s what I wanted, so I was cool with it.”

After about a year in Long Island, the opportunity arose to go to ‘A-school’ and become a machinery technician. “I wanted to learn about the engineering side of things,” said Harnay.

When he completed school, there was an opportunity to go to Hawaii. His duty station is part of the Naval Support Division (NSD) which is part of sector engineering in Honolulu. Harnay and the rest of the NSD provide engineering and maintenance support to all three FRC's homeported in Honolulu. 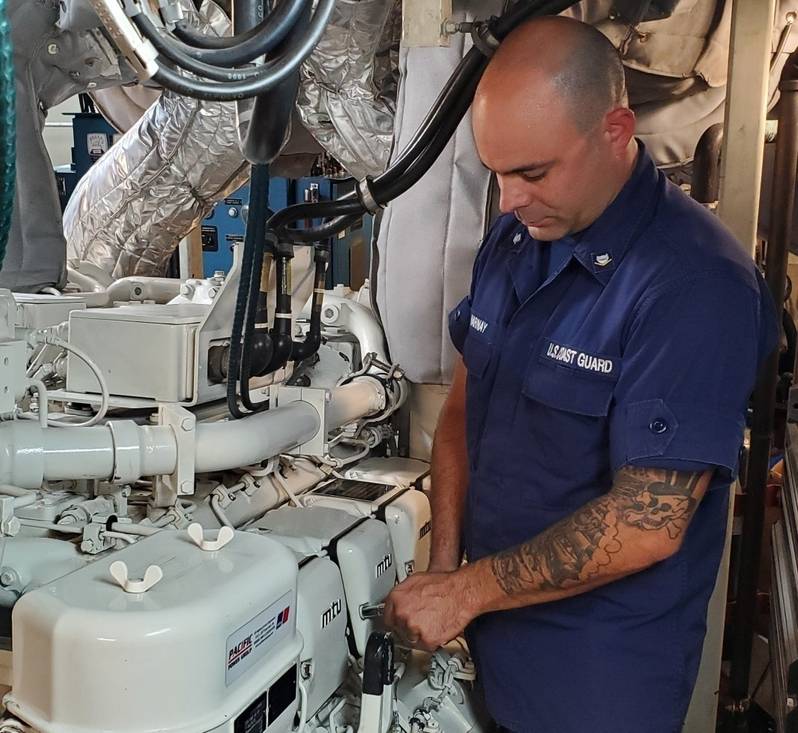 Petty Officer 3rd Class Morgan Harnay has gone from being a deck officer on super yachts to being a machinery technician in the Coast Guard. Harnay now spends his free time on liberty as a captain of a dinner cruise yacht. (Coast Guard photo courtesy of Sector Honolulu)

Some of the team, like Harnay can occasionally get underway with the ships for training or to support missions if crews are short-handed for some reason. While underway in Hawaii, he was finally able to obtain his U.S. citizenship.

“So, I’m in Hawaii, I have my citizenship, now I want to be a captain,” said Harnay. “So, I went to school and got my captain’s license, applied for a job here in Honolulu, and I’m now the captain of a dinner cruise yacht.”

Harnay was thankful to his command for allowing him to take the part-time position, which he does a few evenings a week when he’s off duty.

With a short time left on this enlistment, he has to decide what comes next.

“For me, because I’m from France, being in the Coast Guard is a proud feeling. I have a lot of friends in Europe that never experienced what I get to do every day,” said Harnay. “I get to look at it through the eyes of the American military, which in Europe is looked upon with big eyes. It’s a very special feeling.”

While France is where Harnay is from, Miami has become home to him. If the time comes for him to return home once his Coast Guard service is complete, he can do so without any hesitation. Not only is Miami home, but it also happens to be one of the largest markets for superyachts in the world. With his previous experience working through the ranks as a deck officer, his U.S. citizenship, captain’s license, and Coast Guard experience all on his resume, he will likely be in demand to captain any vessel.

“The Coast Guard is very well respected in the industry I came from,” said Harnay. “You really stand out anytime they see Coast Guard on your application.”

Although not the original reason for joining the Coast Guard, it’s definitely become the cherry on top of the whole adventure. From just hoping to figure out how to get back on the yacht as a deck officer to becoming a U.S. citizen and a member of the Coast Guard.

“While my family and I still have time to make the decision, in the end, that’s how we will make our choice. Which position is the best option for my family,” said Harnay.

Whether he stays or goes, the impact the Coast Guard made on his life will never be forgotten. 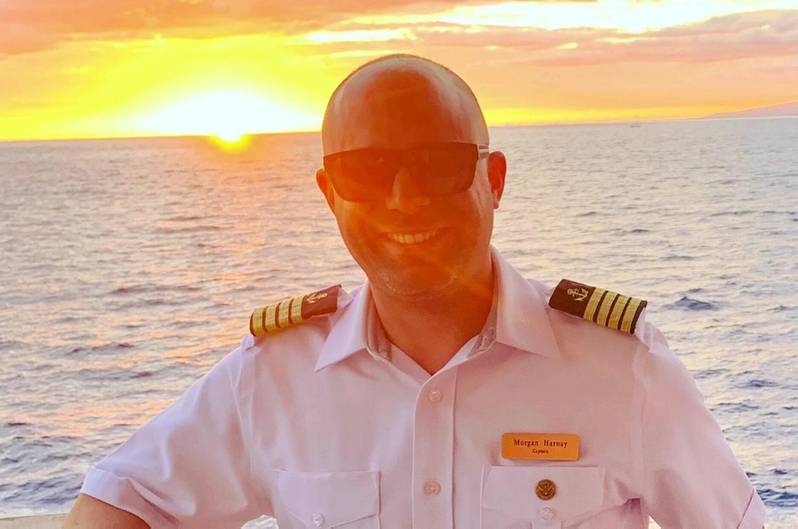 Petty Officer 3rd Class Morgan Harnay has gone from being a deck officer on super yachts to being a machinery technician in the Coast Guard. Harnay now spends his free time as captain of a dinner cruise yacht. (Coast Guard courtesy photo)