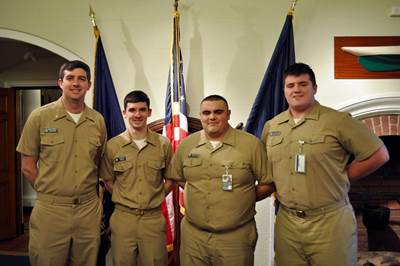 Crowley Maritime Corporation’s 2016 Thomas B. Crowley Sr. Memorial Scholarships have helped to further educational opportunities for four students of State University of New York (SUNY) Maritime College. The recipients, who will each sail with Crowley this summer, were chosen based on their demonstrated leadership skills, financial need and plans to pursue a career in the towing or petroleum shipping industries after graduation.

The awardees are Daniel Press from Middletown, Del., Richard Scales from Huntsville, Ala., Conner McDaniel from Islip Terrace, N.Y., and Andrew Scalice from Howard Beach, N.Y.

Scholarship recipient Press is a third-class cadet studying electrical engineering and pursuing an engine license. He is a three-time Admiral’s List honor roll student that works as an Installation Deployment Officer (IDO) Squad Leader in the Regiment, and is a member of the Electronics Club and the Technology Club.

Scales is a graduate student in the international transportation management program, pursuing a deck license. On campus, Scales is a member of the Offshore Sailing Team and the Artillery Club. He is also the assistant women’s volleyball coach and this semester earned a place on the Admiral’s List.

McDaniel is a third-class cadet in the marine transportation program working towards his deck license.  He plays on the SUNY Maritime football team and is involved in various clubs on campus including the Fishing Club and Powerlifting Club.

Scalice is also a third-class cadet in the marine transportation program pursuing a deck license. Scalice works as a Student Ambassador for the admissions department, and is a member of the Honor Guard and the Drill Team.

Since 1984, Crowley has provided more than $3 million dollars in scholarship funding for more than 1,000 students. The company has also donated more than $2 million over the years to support other educational programs.  In 1994, Chairman and CEO Tom Crowley Jr., established the Thomas B. Crowley Sr. Memorial Scholarship Program in honor of his father who led the company to extraordinary heights before passing away in 1994. The company continues to give scholarship dollars to deserving students in the U.S., Alaska and Puerto Rico. In 2006, the program was expanded to Central America and to date, has provided financial assistance to more than 20 students in that region.