The Port of Rotterdam has blazed a path for ports globally in terms of automation, digitalization and decarbonization. As he enters the final year of his tenure, Allard Castelein, CEO, Port of Rotterdam, says there is still much work to do.

While many global organizations are adept at ‘talking the talk’, the Port of Rotterdam stands out as ‘walking the walk’ in regards to real investment and innovation in robotics, digitalization and infrastructure improvements to facilitate the efficient, effective transfer of ship’s cargo for distribution globally. Sitting at the helm to ensure a smooth flow of commerce is CEO Allard Castelein, who has held the top spot at Europe’s largest port since 2014. Today Castelein, who enters the final year of his tenure, and his team are facing down a number of unique challenges, including the Russian war in Ukraine and the resultant sanctions that have halted the flow of Russian commerce to the west, and plunged all of Europe into an era of uncertainty regarding energy and economic security.

The Port of Rotterdam: By the Numbers

“The Port of Rotterdam is by far the largest port in Europe, and one of the leading ports in the world,” said Castelein, moving approximately 470 million tons per annum [468.7 million tons in 2021], creating approximately 565,000 jobs by businesses associated to the port, plus “8.2% of the gross national product of 63 billion euros through the trade volumes that we generate and facilitate.”

Despite the port’s historical reliance on moving cargos – particularly energy – to and from Russia, in mid-July the port reported that first half ’22 total cargo throughput of 233.5 million tons was slightly higher (0.8%) than the first half of 2021, with sharp increases in LNG and coal cargos to reduce the impact of Russia cutting gas supplies to Europe via pipeline. In addition, the throughput of crude oil increased, with oil products falling off. Throughput of iron ore, agricultural bulk and containers was lower than in the same period last year.

“Europe relies heavily on Russian energy, and the current geopolitical situation makes Europe very vulnerable,” said Castelein in announcing the 2022 first half results. “A positive development is that concrete steps have been taken in recent months to make our energy supply more sustainable and to further our energy independence, particularly through investment decisions to build a large biorefinery and Europe’s largest green-hydrogen plant. The business community has made a commitment in the last half year to invest €3 billion in the energy transition.”

The Port Authority had a good first half of the year financially, with revenue increasing by 6.3% (€ 24.6 million) to € 412.2 million and operating expenses decreasing by 2.4% (€ 3.1 million), mainly due to lower expenditure on sand extraction. Gross investments in the first half of 2022 amounted to € 117.1 million, including capital injections in participating interests (versus first half of 2021: € 100.5 million).

While the war in Ukraine and resultant energy insecurity is the headline, there remain other challenges to Castelein and his team – and in fact to port facilities globally – including rampant inflation and the threat of a recession.

“Since the outbreak of the war, we have seen a shift in various volumes, but if you add all the pluses and deduct all the minuses, the half year results were about the same as last year's,” said Castelein.  But the increasing level of sanctions makes the second half of 2022 and beyond a bit less clear. “Coal, oil, oil products, potentially gas, LNG … each and every one of them used to have an important Russia dimension; some 20 to 30% of the energy volumes were originated in Russia. Now, that is coming to a full stop over time with the exception of LNG. And some of the volumes will be substituted from other sources. But altogether, that's 62 million tons of trade volume with Russia (lost). There's no trade volume with Russia anymore, and that's some 8% of our total container volumes at a Russian destination or origin.”

One Port’s Threat is another Port’s Opportunity

The world was a significantly different place when Castelein took the helm at the Port of Rotterdam in 2014, with the simultaneous evolution of markets, economies and technologies, but at its bare essence there is much the same.

“If you look out of the window, it still is a port,” said Castelein. “We still have the vessels coming in. We still have the industries that have a presence and the activities in the terminal facilities that deliver service to Northwest Europe.”

That’s the exterior, and Castelein says that the Port of Rotterdam’s investment in tradition equipment, hardware, dredging, security and physical infrastructure is ongoing and significant. But “what’s under the hood” of the port looks significantly different.

Eight years ago when he started in his post, Castelein said that two major disruptions “premised on digitization and energy transition” were coming fast, and “[we decided] we would embrace those disruptions as opportunities rather than as threats.”

The manifestation of these “opportunities” essentially transformed the organization to its core. “As a company, we have changed dramatically from our prior position as a custodian of the facilities, the premises and the ports,” said Castelein, “We've become a very active and proactive business developer, entrepreneur, investor, and co-creator of the various solutions in energy transition [as well as] the digital domain.”

With the destination clear, the port embraced and embarked upon several avenues and initiatives “to digitize the logistics value chain and to create a digital twin of this port; to truly become the smartest port there is, with an IoT premise and base and a continuous drive towards optimization and cutting out waste.” And in terms of ‘waste’, Castelein refers not only to cutting out waste in time, money and energy, but also to cut waste from an emission profile perspective.

“We've invested in the last couple of years well over €300 million in robotics, optimization and digitization” across the various port domains, said Castelein, including investments in Routescanner [note: Port of Rotterdam Authority is the parent company of Routescanner], which enables forwarders to plan their journeys from and to point A to B anywhere on this planet.

“We invest in the hardware; we invest in the smart application, but also we invest in the entire port call optimization,” said Castelein. This investment is aimed to have tangible benefit, and he said that by creating an open access platform for all service providers to interact, that the port call period in time can be reduced 20 to 25%, effectively helping companies throughout the chain to cut costs and emissions.
“Now that is off efficiency. That will save time, it will save money, it will save emissions,” said Castelein. “But the same applies if we connect to other ports, and have AIS-enabled more information over a longer part of the value chain.”

To that end, the Port of Rotterdam Authority and the Maritime and Port Authority of Singapore (MPA) recently signed an MoU to establish the ‘world’s longest Green and Digital Corridor’ to enable low and zero carbon shipping, bringing together various stakeholders across the supply chain with the aim to realize the first sustainable vessels sailing on the route by 2027. Central to the partnership is the fact that Singapore and Rotterdam are among the largest bunkering ports in the world, key cogs in the emerging market for alternative fuels across the sector. Beyond alternative fuels, the MoU also aims to optimize maritime efficiency, safety, and the transparent flow of goods by creating a digital trade lane where relevant data, electronic documentation and standards are shared. 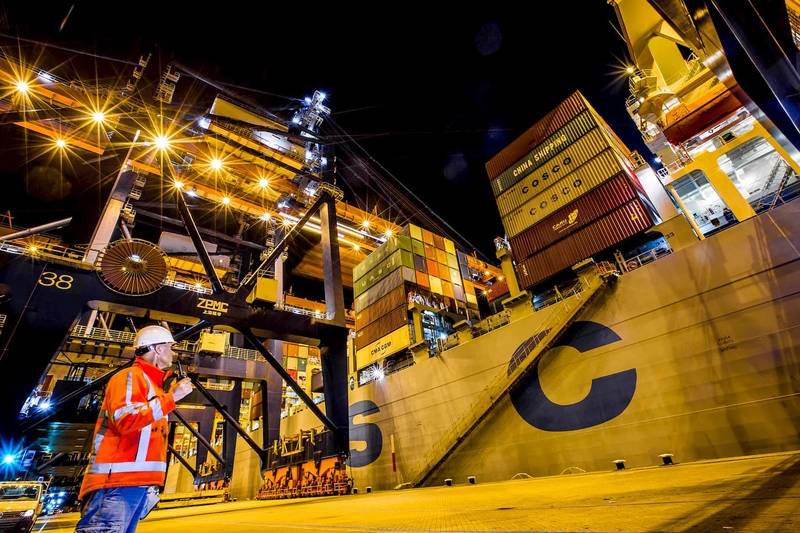 While the world collectively struggles with the means to effectively reduce its emissions, the Port of Rotterdam has adopted a four-pillar plan based on efficiency, new energy systems, new materials and fuel systems/circularity and decarbonization of modalities, and set hard targets to drive its plan: 55% reduction of carbon emissions by 2030; carbon neutral by 2050.

“The efficiency bit is reducing, for instance, residual heat from the process industry to supply energy to residential areas or plants and factories far from the port,” said Castelein, but also includes building a carbon capture storage facility that “can collect the carbon, deliver it to the fence, and take it through the port to an offshore depleted gas field where it is stored for eternity.”

The second pillar is about the energy system, focused mainly on electrification and hydrogen. A few months ago the port announced that Shell will build the largest (200MW) electrolyzer in the world, with the expectation that by 2030 it will have 1.2 gigawatts of electrolyzed capacity installed. The plan for this extends far beyond the port’s walls, extending the hydrogen infrastructure to the southern parts of the Netherlands and into Germany to supply industrial clusters in Germany with green hydrogen, with CO2 taken back in return to be stored in that same depleted field.
The circularity pillar is multi-faceted, including a waste to chemicals facility, a recycling facility for lithium ion batteries as well as the construction of a sustainable aviation fuel facilities.

In leading to discussion of the fourth pillar – decarbonization of modalities – Castelein simply says “either we invest, we facilitate, we allocate land, we build quay walls or we partner in these processes. In the case of modalities, “we are a co-investor in a facility that supplies green powered battery packs to inland vessels, where they can take onboard a fully charged battery, sail point-to-point in a corridor, offload the discharged batter, take on a fully charged battery and continue the journey.”

In total Castelein estimates that port is involved in “well over 50 or so projects that we operate, we run, partner and co-invest in.”
“If you sail through the port, you can see the spades in the ground, you can see the buildings being erected; it's real, it's live, it's coming together,” said Castelein, who laments that one of the downsides of his job is the tremendous amount of time it can take to evolve from good idea to built solution. But with Castelein at the helm, all roads lead to a 55% reduction in emissions by 2030, and carbon neutral by 2050. “For the scale of this industrial port facility, this is unprecedented.” 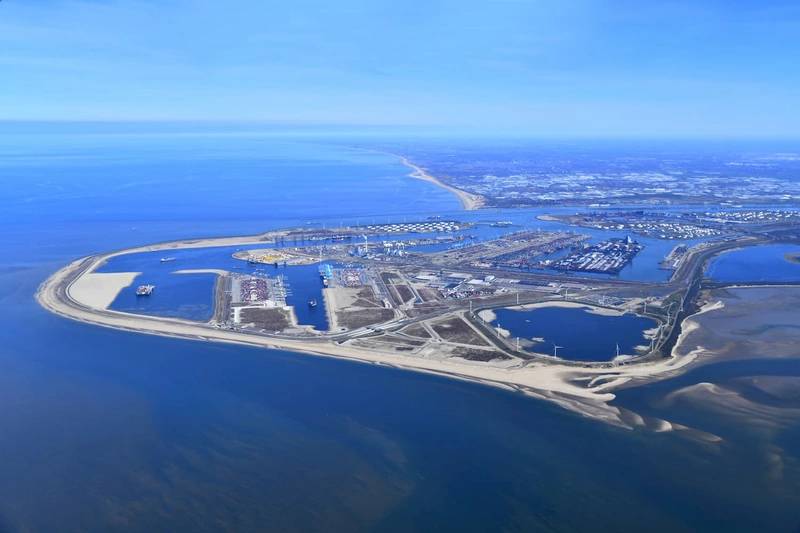 Helena Lennerstedt was appointed CEO of Humphree. She has a background in several leading positions in different companies in the Swedish industry…