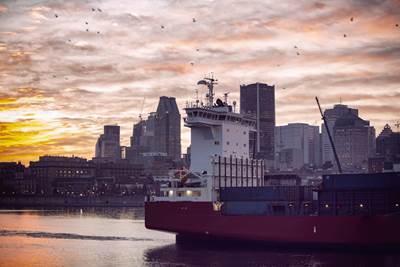 Striking dockworkers at Canada's second-biggest port will gradually return to work on Saturday, the Montreal Port Authority (MPA) said, after the federal government passed a law to end the walkout.

Late on Friday, the Canadian government passed back-to-work legislation to halt the strike, which workers at the Port of Montreal began on Monday over changes to their work schedules.

"Our priority now is to plan for the resumption of port operations and to ensure efficient and seamless service," MPA Chief Executive Martin Imbleau said.

But a union representing dockworkers at Canada's second-biggest port by shipping volume said it will challenge the Canadian government's new strike-ending law in court as it violates fundamental rights protected by the constitution.

The Canadian Union of Public Employees (CUPE) Quebec's 1,125 longshore workers at the port have called the new work schedules from the Maritime Employers Association unfair and have demanded they be withdrawn. The strike was the second walkout in less than a year.

The union said it was a dark day for workers' rights in Canada.

"Prime Minister Trudeau has just sent a strong and clear message to all employers across the country: no need to negotiate in good faith with your workers, because if the going gets tough, we'll be there to support you," CUPE National President Mark Hancock said.

Labor Minister Filomena Tassi said in a statement on Friday the government will work with the parties to select a mediator in the coming days to help reach a deal. The new law does not allow any work stoppages.

The unionized workers have been in contract negotiations since 2018.

Business leaders had urged the government to intervene as the strike threatened to disrupt supply chains just as the country was recovering from the COVID-19 pandemic.

An average of C$275 million ($224 million) worth of goods move through the Port of Montreal every day. The Canadian Chamber of Commerce estimated the labor stoppage would cost between C$10 million and C$25 million per day.