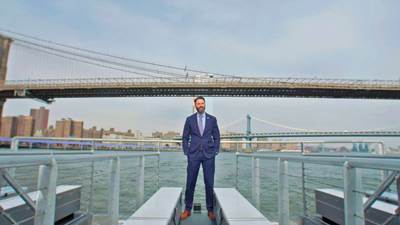 Hornblower Group announced that Brendan Smith, formerly VP of Engineering, NYC Ferry, has been named President of Seaward Services, Inc. Smith replaces John Keever, who has retired after 50 years in the industry, and will report to Scott Thornton, COO of Hornblower Group’s Ferries and Transportation Division.

Smith brings more than a decade of maritime experience to his role as President, including 6.5 years with the U.S. Navy, where he served aboard the nuclear-powered submarine, USS Santa Fe.  His roles included Chemistry and Radiological controls Assistant (CRA), Quality Assurance Officer (QAO), and Combat Operations Instructor. In his first role as a civilian, he oversaw Property Operations at Paramount Group, a Manhattan-based real estate investment company.

Smith joined Hornblower Group in 2016, citing a desire to return to the water.  He joined NYC Ferry in 2016, first as Director of Engineering before his promotion to Vice President.

Smith holds a Bachelor of Science in Climatology from The Ohio State University and a Master’s of Engineering Management from Duke University. He also graduated from the Naval Nuclear Power Training Command and the Navy's Nuclear Prototype Training Unit where he received certification from the Department of Energy to manage an S5W nuclear reactor.