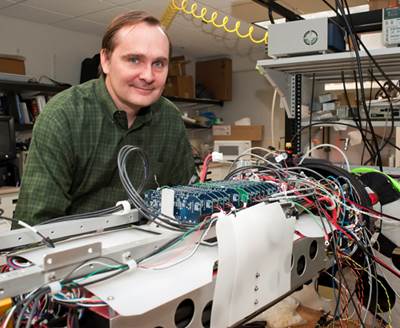 James Bellingham will begin work as the Director of the WHOI Center for Marine Robotics in early fall 2014. Bellingham comes to WHOI from the Monterey Bay Aquarium Research Institute (MBARI), where he was director of engineering and most recently chief technologist. (Photo courtesy of MBARI)

The Woods Hole Oceanographic Institution (WHOI) has appointed James Bellingham as the first director of its Center for Marine Robotics.

Bellingham will come to WHOI in early fall 2014 from the Monterey Bay Aquarium Research Institute (MBARI), where he was director of engineering and most recently chief technologist. Bellingham earned his PhD from Massachusetts Institute of Technology, where he was founder and manager of the Autonomous Underwater Vehicle Laboratory.  He was also co-founder of Bluefin Robotics in 1997, a Massachusetts-based company that develops, builds and operates autonomous underwater vehicles (AUVs).  Bluefin was later acquired by Battelle.

“We are thrilled to welcome Jim to Woods Hole Oceanographic,” said WHOI President and Director Susan Avery. “His combination of a strong academic research background, entrepreneurial business savvy, and experience working with other academic, nonprofit, private sector, and government sectors will help advance the field of marine robotics and speed its application for science and a broad range of other uses.”

“Marine robotics is in its infancy, with tremendous potential to transform our understanding of the ocean,” said Bellingham.  “I’m excited to join WHOI, with its outstanding history of advancing the ocean sciences through technology innovation. Our goals will be to foster a vibrant and innovative community, and to direct new robotic capabilities at solving important ocean science problems.”

Bellingham is the author of dozens of scholarly papers, has participated in research expeditions around the world – from Monterey Bay to the Mediterranean Sea to the Antarctic – and has served on numerous scientific advisory boards and steering committees, including chairing the Naval Research Advisory Committee (NRAC) and serving on four National Academy studies.

“Jim is a forward looking person skilled in leading an innovative and entrepreneurial enterprise – which are highly valued traits in the WHOI culture,” said WHOI Executive Vice President and Director of Research Larry Madin. “Our scientists and engineers are continuously advancing boundaries of knowledge in key areas of research and inventing new ways of working on and in ocean.”

“We've worked with Jim since his days at MIT in the early ‘90s. Our relationship has been both collaborative and respectfully competitive,” said interim CMR Director Dana Yoerger, a leading researcher in robotics and unmanned vehicles with the WHOI Deep Submergence Lab. “Jim has been a leader in developing robotic technologies and methodologies that have created new opportunities across many oceanographic disciplines.  CMR has found a capable, experienced leader in subsea robotics with unmatched credentials and accomplishments who appreciates WHOI's strengths and the opportunities and challenges in front of us. I'm very eager for Jim to bring his experience in academia, industry, and government to WHOI.”

“Under Jim’s leadership, CMR will advance a vision of the future of marine robotics through world-class research and development; create new technologies; prove them in real-world operations; and apply them to societal problems and economic development through new public-private sector partnerships,” said Avery.

Scott Theriot has been named president and CEO of Southwest Shipyard L.P., effective August 12, 2020.Theriot takes over from…

LIG Marine Managers, a commercial marine and longshore MGA in the U.S. and Lloyd’s broker, announced that veteran marine…