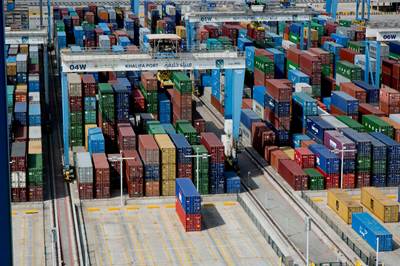 Abu Dhabi Ports, the master developer, operator and manager of commercial and community ports within the emirate of Abu Dhabi, Fujairah Terminals at the Port of Fujairah, and Khalifa Industrial Zone Abu Dhabi (KIZAD), celebrates Emirati Women’s Day, in recognition of the outstanding contributions of the Emirati women at Abu Dhabi Ports.

Captain Mohamed Juma Al Shamisi, CEO of Abu Dhabi Ports, expressed his deep pride in Emirati women’s accomplishments in the UAE and in the company, saying, “Emirati women have been increasingly playing a leading role at Abu Dhabi Ports and the company has encouraged and recognized their contributions. These women are an inspiration to their younger Emirati sisters and are working side by side with their male counterparts to the success of the country.”
Last year, in commemoration of Emirati Women’s Day, Abu Dhabi Ports announced the launch of its first Women’s Committee. The committee aims to reinforce the unique role women play in the maritime industry, as well as the wider local community.
Earlier this month, Abu Dhabi Ports also celebrated the graduation of the first three Emirati women ‘Masters of Coastal Waters’ from Abu Dhabi Ports Maritime Training Centre. The women graduated as masters (Captain) of 24-Meters vessels, after six and a half months of extensive theoretical and practical training and coursework. Abu Dhabi Ports began the course specifically to train Emiratis in the skills required to become sea captains.
Dr. Noura Al Dhaheri, General Manager of Maqta Gateway, a subsidiary of Abu Dhabi Ports, President of Abu Dhabi Ports' Women's Committee, and Chairman of the Research and Development Committee, also commented, “This is a special day for women across the nation – a nation I am proud to call my own. We are blessed with exceptional role models such as H.H. Sheikha Fatima, and it is thanks to her efforts and commitment to empowering women that I am in this position today.
“H.H. Sheikha Fatima has always been a strong advocate for women’s empowerment and calls for females to play a greater role in the nation’s progress. She once said that there are no limits to what women can achieve in all fields, and the role women play at Abu Dhabi Ports is a testament to that call. It is my absolute honor to oversee the empowerment of women in this company as the President of Abu Dhabi Ports’ Women’s Committee and I look forward to witnessing first hand further growth in our industry, and ultimately the growth and success of the UAE.”
Dr. Noura Al Dhaheri is the first female in the Middle East to receive a Doctoral degree in the field of seaside operations.
“Abu Dhabi Ports and the UAE is ahead of the game in gender equality and leading the way in terms of female empowerment,” said Jameela Hamad Al Junaibi, Vice President of Corporate Marketing & Communications at Abu Dhabi Ports. “Our women have unlimited potential, and H.H. Sheikha Fatima bint Mubarak, Chairwoman of the General Women's Union, Supreme Chairwoman of the Family Development Foundation and President of the Supreme Council for Motherhood and Childhood, has set such a strong example for our country – both men and women – in terms of her vision, commitment, ambition and generosity. This is very important. Here in the UAE, the support from our leaders and from our families is tangible; you can feel it at work, at home, and in our communities. Women are accepted as leaders. By celebrating the success of our mothers, our daughters, our sisters, we can be an example for the world."
Noura Rashid Al Dhaheri, Cruise Terminal Manager at Abu Dhabi Ports and the First Woman in the Middle East to hold this position, commented, “Today we see our fellow women are dreaming big and through the vision of H.H. Sheikha Fatima and the support of our leadership, our employers and our families, those dreams have become a reality as we work side by side with our male counterparts to bring in a new era for UAE’s economy. At every step, we have been encouraged and guided by the company to fulfill our potential and have been entrusted with leadership roles. Abu Dhabi Ports has enabled us to take the helm and direct the company to new horizons. Today, the UAE proudly has female ministers, professors, doctors, pilots, and seafarers, and it fills me with pride to be part of this great country.”
Launched in 2015 by Her Highness Sheikha Fatima bint Mubarak, Chairwoman of the General Women's Union, Supreme Chairwoman of the Family Development Foundation and President of the Supreme Council for Motherhood and Childhood, Emirati Women’s Day recognizes the role the nation’s women play in the development and advancement of the UAE. The date also marks the anniversary of the creation of the General Women’s Union in 1975.
Now in its third year, this year’s theme is ‘Women are partners in giving’, which promotes social responsibility, national service and volunteer work among women, in line with the ‘Year of Giving’ initiative launched by the UAE’s President His Highness Sheikh Khalifa Bin Zayed Al Nahyan.
Abu Dhabi Ports noted several other success stories at Abu Dhabi Ports of remarkable Emirati women at different levels, amongst those are Aisha Hassan Al Marzouqi and Laila Al Bishr, the first two women to operate dock cranes at Khalifa Port, Afra Salem Al Marzouqi the first Emirati to operate forklifts at Khalifa Port. Fawziya Hasan Al Dhaheri is the first Emirati woman to work as VTS operator within Abu Dhabi Marine Services "SAFEEN" and Sahar Rasti is the first woman to work at ‘SAFEEN’ and the first to obtain a certificate from the International Association of Marina Aids to Navigation and Lighthouse “IALA”.
Abu Dhabi Ports • International Association • Khalifa Port
Email