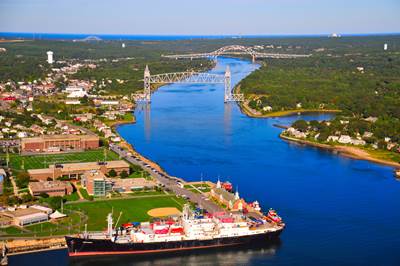 An aerial view of the campus of the Massachusetts Maritime Academy. (Photo: MMA)

This year the seven U.S. maritime academies graduated nearly 1,200 young men and women, many of whome will pursue maritime careers.

“At a time when our nation faces unpredictable threats, the need for qualified mariners is of critical importance due to their indispensable role in supporting the U.S. merchant marine,” said Thomas A. Allegretti, chairman of the American Maritime Partnership. “We congratulate the American maritime academy graduates for passing the comprehensive U.S. Coast Guard exam and welcome our new shipmates who will put their knowledge to work, transporting the cargo that delivers vital necessities for our nation’s economy and security.”

Joining the more than 500,000 private U.S. citizens employed through the domestic maritime industry, the majority of graduates from these seven maritime academies enter the workforce as licensed officers. The new graduates are welcomed into an industry that is proud to provide good family wage jobs as well as a lifelong career path.

Many will sail on vessels in the domestic fleet, which includes over 40,000 self-propelled ships and tug-barge combinations. In a strong economy, these vessels will move more than one billion tons of cargo between U.S. ports, or roughly a quarter of the nation’s freight. A cadre of skilled U.S. citizen merchant mariners also boosts national security by supporting the U.S. military during times of war and national crisis.

“The U.S. Merchant Marine is vital to our nation’s national security and economic prosperity, carrying essential American commercial and military cargo in times of peace and war,” said Joel Szabat, executive director of the Maritime Administration. “The nation relies on our maritime academies to train the next generation of licensed mariners to operate and command America’s commercial and military sealift ships.”

New officers start out as either a Third Mate or a Third Assistant Engineer on self-propelled vessels or corresponding positions on tug-barge combinations. Mates direct navigation and the handling of cargo. Engineers are in charge of propulsion and the vessel’s machinery. A deck career culminates as the Captain or Master of the vessel. In the Engine Department, the Chief Engineer is the top position.

Not all graduates will enter the commercial maritime industry. A number will choose to protect our nation as members of all branches of the military, including the U.S. Navy and U.S. Coast Guard. Even those who pursue a career on commercial vessels will in times of crisis often serve on military vessels engaged in ferrying supplies to U.S. troops overseas, just as they did during Operations “Enduring Freedom” and “Iraqi Freedom” (2002-2010) when U.S.-flag commercial vessels transported 63 percent of all military cargoes moved to Afghanistan and Iraq.

All graduates are required to pass the extensive U.S. Coast Guard exam, which covers days of testing and requires encyclopedic knowledge of the career path chosen. For that reason, maritime academy cadets supplement their classroom instruction with significant time on either training ships operated by their schools or aboard actual commercial freighters.