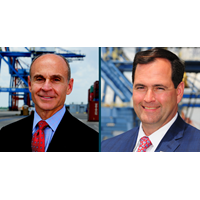 . Under his leadership, NC Ports achieved its most profitable years on record; embarked on a more than $200 million capital improvements plan; reintroduced intermodal rail; and welcomed the largest container vessels in the Ports Authority’s history. Additionally, container volumes through the Port of Wilmington have increased 25% during his tenure, while general cargo at the ports of Wilmington and Morehead City increased 58%. NC Ports has also become a significant player in the cold chain sector. Since 2014, refrigerated container volume through the Port of Wilmington has more than quadrupled. In

North Carolina Ports has hired Benjamin M. Massa as the new Director of Carrier and Trade Development to further grow and expand container business at the Port of Wilmington.   “NC Ports has experienced monumental growth in container business in the last year and Ben’s vital role will allow us to continue that growth today and into the future,” said NC Ports Vice President, Trade Development, Hans Bean.   Massa brings decades of expertise in the maritime industry with him to NC Ports. Massa previously served as Commercial Director, AVP Sales and Marketing for United