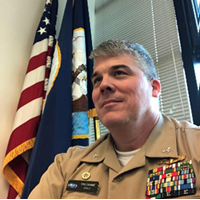 two major overseas deployments. During his tenure in command, he served as Maritime Interdiction Operations Commander for the deployed battle group, skillfully coordinating multi-ship anti-piracy interdiction efforts, resulting in sustained safe passage for international commerce in the Red Sea and Gulf of Aden.Starting in December 2010, CAPT Crone joined the Surface Warfare Officer Acquisition Corps, and worked at the Washington Navy Yard in DC, working in a variety of positions including Technical Director in the Anti-Terrorism Program Office (PMS 480), Principal Assistant Program Manager in the Mine

them for 13 days before they were brought before a judge via a video link. He found them not guilty. According to Danish law, a citizen cannot be held in custody for more than 24 hours without being brought before a judge. The compensation was unrelated to the suspects' innocence. Attacks in the Gulf of Aden and Indian Ocean have dropped from a peak of 237 in 2011 to just 10 in the first nine months of this year, the lowest since the piracy crisis began in 2008, according to the International Maritime Bureau. Piracy has since picked up along the west coast of Africa and is expected to increase