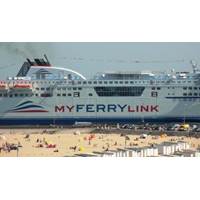 A deal was reached on Monday to save hundreds of ferry jobs at the northern French port of Calais, the French transport minister said, ending a dispute that has disrupted traffic through the Channel Tunnel linking France and Britain.   Workers at ferry service MyFerryLink had intermittently blocked the port and the tunnel in recent weeks in a protest over job cuts, after the company, previously owned by Eurotunnel , was sold to Denmark's DFDS.   The dispute has added to public order concerns in Calais, where thousands of migrants are camped in the hope of boarding trains or lorries 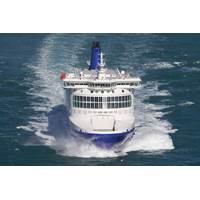 DFDS Seaways Calais-Dover ferry service, suspended by a workers' blockade of Calais port during the weekend, will resume on Tuesday morning, Transport Minister Alain Vidalies said after talks with the parties involved.   Ferry workers, industry executives, the Channel Tunnel operator Eurotunnel and the French government are due to reconvene later this week for further talks to settle the labour dispute after breaking up without agreement on Monday, Vidalies said in a statement.   "Discussions took place in a constructive atmosphere and have been suspended so that all the parties can

are trying to prevent job cuts after their company was sold to a Danish company earlier this month.   They agreed to let some boats go after their representatives were invited to meet with Transport Ministry officials on Thursday morning, following a threat to disrupt traffic through the Channel Tunnel for 48 hours.   "We've accepted to lift the blockade of the port from 20:00 (1800 GMT) to let P&0 boats through one by one," union official Eric Vercoutre told journalists.   The threatened disruption of Tunnel traffic for Thursday and Friday would coincide with a