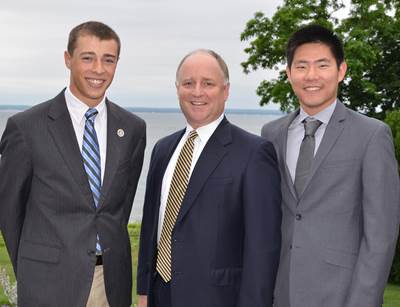 Webb Institute, a four-year college specializing in naval architecture and marine engineering, announced the 2015-2016 recipients of Crowley Maritime Corp.’s Thomas B. Crowley, Sr. Memorial Scholarships. Nicholas Ratinaud, of West Bloomfield, Mich., and Andrew Ko, of Philadelphia, were chosen by the school’s scholarship selection committee for their leadership qualities, academic excellence and commitment to the maritime industry.
Ratinaud and Ko were able to meet Tom Crowley Jr., company chairman and CEO, last month during Webb’s 119th commencement ceremony, at which he was awarded an Honorary Doctorate of Commercial Science degree.
In his commencement address, Crowley commented on the direct importance of Webb and its programs to Crowley and the maritime industry as a whole, saying, “Webb is a very special institution. Wall Street has Harvard. Silicon Valley has Stanford and the maritime industry has Webb. Your degree carries a lot of prestige and respect. Companies will be looking for you – including Crowley and our naval architecture and engineering firm, Jensen Maritime. We have hired a significant number of Webb graduates over the years and will continue to do so because Webb engineers are very talented and our engineering consulting services are only going to continue to grow.”
As a third year student, Ratinaud will spend this summer working with Herreshoff Designs, Inc., focused on multiple projects related to classic sailboats. He previously interned at New England Boatworks as a member of the build team for an 88-foot, high-performance ocean racing yacht and has also sailed as a cadet aboard a Greek, dual-fueled, diesel-electric, LNG tanker. Ratinaud competes as a member of the soccer, tennis and sailing teams and is actively involved with Webb’s student Society of Naval Architects and Marine Engineers (SNAME).
Ko, a Carnegie Mellon University graduate with a bachelor’s degree in civil and environmental engineering, and engineering public policy, is now a junior at Webb where he is pursuing his interests in offshore renewable energy. He has participated in Webb’s work program by machining at Bay Ship & Yacht Co., sailing for MaranGas Maritime Inc. and working at both SafeBoats International and Glosten Associates. Ko is also involved with Webb’s leadership and education committees, SNAME, the student Marine Technology Society (MTS) and is both class president and captain of the basketball team.
Crowley started the Thomas B. Crowley, Sr. Memorial Scholarship at Webb Institute in 2007. Additionally, the Marty Johnson ’88 Leadership Fund was established to expand Webb’s Leadership Program, which has now grown into a week-long event each fall, welcoming the incoming freshman class and current students with individual and team projects. Johnson was a 1988 Webb graduate and Crowley senior naval architect who died while on a salvage assignment in 2006.
Bay Ship & Yacht Co. • Carnegie Mellon University • Crowley Maritime Corp.
Email

The U.S. Department of Transportation’s Maritime Administration (MARAD) said Tuesday it is accepting applications from eligible…