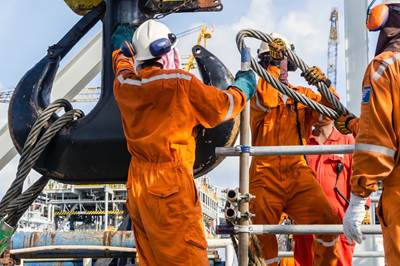 UK-based offshore energy workers' union RMT has called for the government to help preserve the offshore oil and gas industry and jobs amid the coronavirus and the oil price rout.

RMT has warned that oil price wars and a public health pandemic could "drive the North Sea oil and gas industry over the cliff edge, putting tens of thousands of offshore workers out of work, increasing the UK's reliance on imported fossil fuels and extinguishing prospects of a just transition for oil and gas workers."

RMT General Secretary Mick Cash said: "We are extremely concerned at the potential of the current double-edged crisis to permanently damage members’ jobs and conditions, as well as production capacity in the North Sea. We are hearing that exploration projects on the UKCS are being delayed or canceled as oil gas prices plummet to unsustainable levels. This is threatening to take some operators to the wall, along with the contractor and supply chain workers maintaining their assets."

The plea comes a day after the Norwegian energy intelligence firm Rystad Energy warned that 200+ oilfield services companies in the UK and Norway might go bankrupt in the current oil price environment.

Cash said: "Government and industry's ‘Vision 2035’ strategy now looks in serious jeopardy and we agree that immediate Government intervention, coordinated with trade unions, industry, and the Scottish Government, is essential in order to protect jobs and skills across the supply chain, as well as the investment needed to preserve the North Sea’s importance to the national energy mix.

The Union is calling for the Oil and Gas Authority to take over ownership and operation of installations in the event of North Sea operators going out of business, as part of a new industrial strategy for offshore oil and gas.

Also, the workers are asking for government-funded unemployment and sick pay schemes for all offshore workers across production, drilling and Subsea sectors and other supply chain workers who lose their jobs due to contracting Coronavirus, are required to self-isolate or from the collapse in oil prices.

“Norway’s state energy company Equinor has set up a department specifically to respond to COVID-19 with the overriding aim of preserving oil and gas production and the jobs it supports in the North Sea today.

“The UK and Norway are, of course subject to the same economic conditions and the UK Government must agree a new offshore oil and gas industrial strategy with the offshore unions and industry in order to prevent catastrophic job losses and skills shortages especially in Scotland from the combined impact of collapsing oil prices and COVID-19.”

Among the union's demands are for offshore workers to be given ‘key worker’ status, "to recognize their critical role in keeping the lights on during the current public health crisis and for the long term to stabilize future energy, investment and revenue streams from North Sea operations."

RMT is also calling for a standard 2 weeks-on 3 weeks-off offshore rota across all North Sea installations, in order to sustain employment and provide opportunities for developing trainees/skills.

In 2018-19 according to OGUK, there were 259,000 direct and indirect jobs supported by oil and gas operations on the UKCS, including 38,000 contractors and c13,000 directly employed staff on North Sea installations.

Total jobs supported by the sector were over 400,000 in 2014, which was followed by a similar collapse in oil prices which lasted two years.