Tanzania: The Next Hotbed of Construction & Energy Activity? 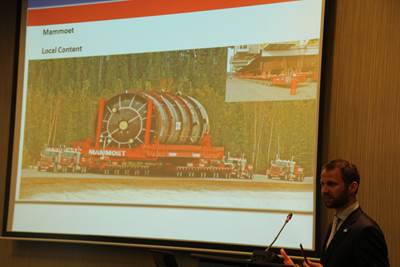 Representatives of Mammoet and other Dutch companies visited Tanzania to explore potential construction projects and investment opportunities in the East African country which has impressive growth rates and large stocks of underseas gas it is looking to develop.

Tanzania is shaping up to be a big opportunity for Dutch companies that are active in energy, infrastructure and transport. Mammoet, Shell, Boskalis, Heerema and Van Oord traveled along with a trade mission led by Minister for Foreign Trade and Development Lilianne Ploumen (PvdA). Before visiting Tanzania, the mission was a guest of neighboring Mozambique, where even more gas has been found.

"The key to this mission is gas," says Ralph Lobbe, Business Development Manager Africa at Mammoet. "Just like the other companies we are looking at both Mozambique and Tanzania. We are ready for any opportunity, whether it is to salvage a shipwreck that is in the way, or to assist in the construction of a refinery or a power plant. We are interested in the Engineered Heavy Lifting and Transport of large and heavy objects for the on-shore LNG plants in East Africa. We are also looking at other activities such as the construction of jetties, transport and installation of Power Plants and transporting Mining Modules.”

Mozambique seems to be further ahead in exploration than Tanzania. However, in both countries it may take another five years before the gas production generates the expected billions in revenue. Infrastructure, legislation, knowledge; everything must be developed. In Tanzania, industry leaders are eager and keen, something which becomes apparent during a presentation in the Hyatt hotel in Dar es Salaam. A dazzling promotional film shows mega projects developed by Mammoet, Van Oord, Heerema and Boskalis. The message: The Dutch can take on anything.

A series of questions follow from local officials. They do not question the technical knowledge, but how do the Dutch companies ensure Tanzania also benefits from the Dutch activities? This seems to be the main concern.

"Financial revenue is important, but we also want local staff and local companies being hired," saidone of the attendants. "In the discussion about the use of local people we only speak about the upstream sector - what about the downstream sector?" asks another. The Dutch representatives state that they have a solid reputation when it comes to such matters and corporate social responsibility in general. Minister Ploumen explains that The Netherlands is involved in the construction of a biogas plant in Tanzania. According to her, it is evident that The Netherlands shows interest in more than only the large gas projects. The Netherlands is a responsible partner, is the message that is conveyed in Mozambique and Tanzania.