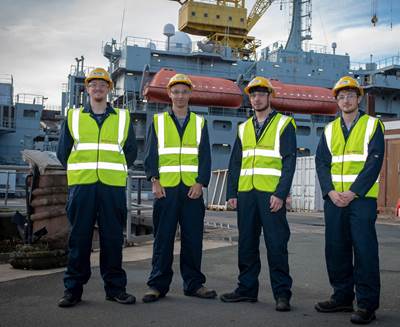 Merseyside’s SeaKing Electrical is ushering in four new starters on the 10th anniversary of its apprentice training scheme.

A grand total of 43 apprentices have now been employed by the marine electrical specialist. SeaKing employs more than 100 engineers worldwide with a track record delivering projects across Europe, Asia, Africa, the Middle East, Caribbean and USA.

“SeaKing is experiencing an exciting period of growth as we look to expand into markets including the superyacht sector, while increasing our presence in our more established areas such as naval, cruise and commercial marine,” he said. “It is essential our team has the skill to fully capitalise on the new opportunities that we have identified in the coming years. This is one of the reasons we like to train people from grass roots level. SeaKing invests heavily in apprenticeships because they provide an excellent foundation in technical skill and knowledge. We can then mould the recruits into world-class marine electrical engineers.

Arnout Damen will take over as CEO of Damen Shipyards Group effective January 1, as the the Dutch shipbuilding conglomerate…